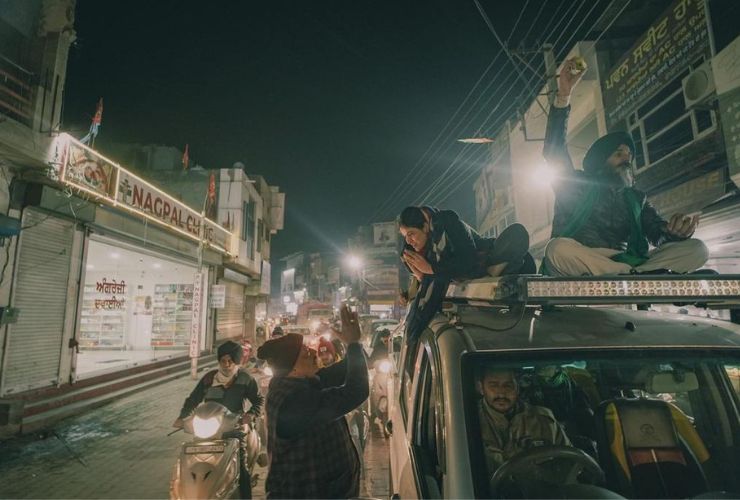 Media Retrenchments: Your rights, the HR perspective and more

“Everything was building up,” says this former Delhi University assistant professor on her debut journey into electoral politics. Anuroop Kaur Sandhu, 29, is a candidate with the newly formed Sanyukt Samaj Morcha (SSM) party from Muktsar constituency for the 2022 Assembly election in Punjab. SSM, headed by farm union leader Balbir Singh Rajewal, is the political front of the various farmer unions which had participated in the 15 month-long farmers’ protest at Delhi’s borders. SSM is contesting the election in alliance with the Sanyukt Samaj Party (SSP) headed by another farm union leader, Gurnam Singh Chaduni.

‘Everything’ building up inside her included hearing about migrant workers suffering during the first lockdown,  the 2020 Delhi riots, Sandhu’s involvement with the 1984 archives (anti-Sikh riots), and the farmers’ protest from when it began in Punjab and later continued in Delhi, where she noted the increasing number of people who were dying in the protest. “Where people are asking for their rights in the middle of a pandemic, how can this government be so ruthless and cruel,” she asks.

Sandhu didn’t want those who died to be reduced to ‘a chart or a graph’ so she began a ‘Human Cost of Farmers’ Protest’ blog with a list and details of farmers and their supporters. More events followed, like the Republic Day violence and  Lakhimpur Kheri incident, adding to Sandhu’s urge to do something. When the farmers’ protest was called off in November 2021 following the government finally meeting their demands, Sandhu was excited imagining that the world of politics had been changed forever.

Where people are asking for their rights in the middle of a pandemic, how can this government be so ruthless and cruel.

“Even before SSM was formed, I thought I would want to do something in the electoral process. Because had we challenged these governments before, these murders, these state-sponsored murders of farmers or other protesters would have never happened,” says Sandhu. She says she wants people to ‘have a choice’ outside these traditional parties.

Your vote is going to decide what your children, younger brothers and sisters are going to face for the next five years.

About the participation of women in the electoral process, Sandhu says established parties in Punjab should have created some kind of affirmative action, but have instead only denied women these roles. She brings up the complaint by Mahila Congress about candidate ticket distribution in January. While Sandhu’s own party has only a few women candidates, she says candidates were chosen based on an open application process and not many women applied. “I feel that women should be there in politics. In fact, they should be everywhere because they represent half of society. Because if women would not be there, the policies are going to be as faulty as they have always been,” says Sandhu. She adds that fewer women in the public sphere, public offices and politics would mean lower safety, as well as fewer opportunities in other areas for women. Fewer women would be allowed outside their homes, she feels.

With some women candidates in the fray in Punjab, Sandhu has noted that male candidates are now putting up photographs on social media of female family members canvassing for votes, and welcomes this focus on the role of women in politics, and recognition of their efforts.

I believe that we will involve all kinds of women, when the policies are being made, so that their lives can be made better.

Sandhu acknowledges the intersectionality when it comes to issues which are important to women voters. A large number of Dalit women were affected in what has come to be known as the SC scholarship scam, she says. Female daily wage earners have had to leave Sandhu’s constituency Muktsar, and go to neighbouring state, Haryana, for cotton picking, says Sandhu, following a drop in cultivation in her district over time. The wages are low, and the women have to leave their homes, she says. These concerns are specific but some are universal to all women in Punjab though, says Sandhu. Topping this list is access to healthcare. As society is patriarchal, women are not open about menstruation, or other health concerns, she says. “A lot of women are getting cancer, including breast cancer. Many are initially shy to tell. By the time they have realised what has happened, they have already gone to a very advanced stage. There is a lot of stigma and taboo related to cancer here,” says Sandhu. While life expectancy has improved in Punjab, the healthy life expectancy has reduced, she says. Finding employment and lack of diversified education options are also concerns for women in the state, says Sandhu. “I feel that there are a lot of such issues, which needs to be dealt with according to different categories of the women that we are looking at. But I believe that we will involve all kinds of women, when the policies are being made, so that their lives can be made better.”

When asked about her experiences as a first-time candidate, Sandhu says she has received a warm welcome wherever she has gone. The challenge has been time as the party was formed recently. So, she has had to choose nukkad (street corner) meetings over door-to-door canvassing. The paperwork and formalities have also eaten into their time, she says. “We don’t have cadres, we don’t have IT cells. It is just me, my mother, my father or some cousin, or somebody who could spare some time,” says Sandhu, saying some union workers also help out. “They do listen to me and they do tell me their problems and they believe that they need change,” she says, adding many voters have told her they have been staunch Akali Dal or Congress supporters in the past, but now want to choose differently, and stand with the farmers. Sandhu is satisfied with the media coverage her party and she have received so far.

On a parting note, Sandhu hoped voters would put aside their association with traditional parties and choose a legislator who is empathetic, understands their problems, comes from the same society, and is here to make a change. The farmers’ protest is historic and this is an important election, she feels. “Your vote is going to decide what your children, younger brothers and sisters are going to face for the next five years,” says Sandhu.