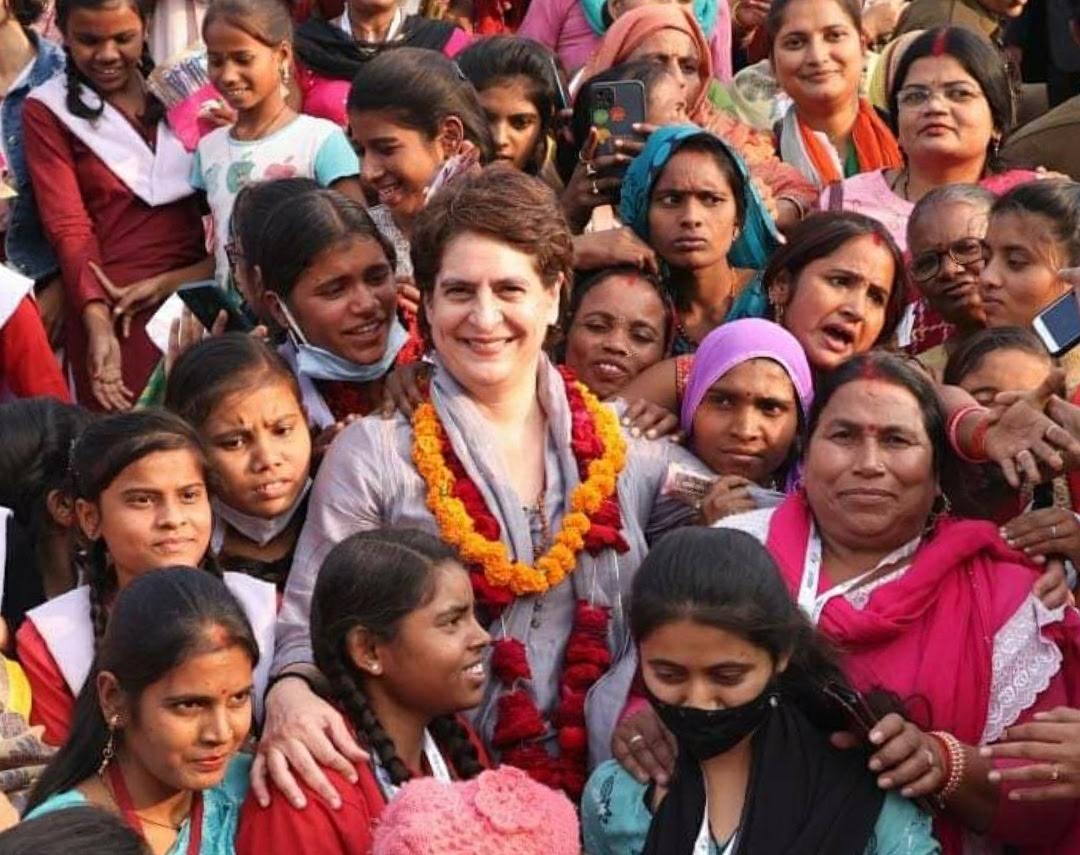 The Curious Case of Women in Media

Priyanka Gandhi Vadra seems to be on a roll.  Her party, the Indian National Congress, might not win more than a few seats in the forthcoming Assembly elections in Uttar Pradesh.  But she is making sure that it remains in the news.

On January 21, when asked who would be her party’s chief ministerial candidate, she hinted that she was the only “face” of her party. “Do you see any other face?” she asked.

Of course, this might be no more than a clever ploy to keep her party in the news. Regardless of whether or not she is serious about entering the electoral fray in UP, it worked and became a trending topic of discussion at least for one day.

Given that the Congress has practically no chance of forming a government in the state, her good-humoured remarks will be dismissed as no more than a publicity stunt.  However, what cannot be ignored so easily is the promise she has made on behalf of her party to reserve 40 per cent of tickets for women in this election.

In October last year, Priyanka Gandhi Vadra announced that the Congress party would allocate 160 of the 403 seats it is contesting in UP to women.  And so far, it seems to be sticking to that promise. In fact, this may well be a key reason why the upcoming UP Assembly election might be remembered and talked about for some time.

The manifesto declares: “The Congress party firmly believes that aggression, divisiveness, and lack of compassion in politics must be fiercely challenged. Women are best placed to bring fearlessness, competence and compassion into the political space while ensuring that policy making is more inclusive.”

While all this is novel and promising, there has been considerable scepticism about the party’s agenda.

The Congress has a dwindling presence in UP.  It won barely 6 per cent of the popular vote in the 2019 general elections.  In the last three Assembly elections, it never went past 11 per cent of the vote share.  The last Congress government in UP dates back to 1989.

So the sceptics dismiss the move as one of mere optics, aiming to draw some attention to a party that stands little chance in what is basically a contest between the ruling Bharatiya Janata Party (BJP) and the Samajwadi Party (SP) and its allies.  They argue that since the party has little chance of winning, it can afford to give away seats to women, as it will make little difference.  In the other states going for elections, such as Punjab, Goa and Uttarakhand, where the Congress party does have a presence, it has not made this kind of commitment.

The enthusiasts, however, point out that by declaring that 40 per cent of its tickets would be set aside exclusively for women, the party has broken new ground. It has done what many citizens, especially women, have been demanding for years, ever since the discussions about reservation of seats in Parliament and Legislative Assemblies for women began in the 1990s.

As is now well-known, the introduction of reserved seats for women at the panchayat level in 1993, and thereafter in nagarpalikas, has largely worked well, with more women entering public office in grassroots political institutions than ever before.  However, the majority of them have gone no further in their political life.  Their chances of breaking into the party system and getting tickets for assemblies or parliament are next to impossible.

While reservations at the panchayat level met with little resistance, there has been stiff opposition to reserving seats for women in state assemblies and parliament. As a result, the Women’s Reservation Bill, meant to guarantee 33 per cent reservation of seats in Parliament and Assemblies for women, remains in suspended animation.

The trajectory of that Bill is a saga in itself spanning over 25 years. First introduced in 1996, it went through several iterations and was re-introduced in 1998, 1999 and 2008. Each time, it was vigorously opposed mainly by male MPs. Twice copies of the Bill were snatched and torn in the House.  In 2010 it was re-introduced yet again, after review by the standing committee. It was even passed in the Rajya Sabha that year.  But since it failed to be passed by the 15th Lok Sabha before its term ended in 2014, the Bill lapsed.

The BJP has publicly supported the Bill and has made repeated promises that it would pass it. But it has failed to reintroduce the Bill either since it came into power in 2014, or since 2019, when it won a majority in the Lok Sabha. Given the way parliament has worked, or rather not worked, in the last couple of years, the pending legislation is unlikely to see the light of day in the current Lok Sabha.

Another idea that has been mooted as an alternative to a law reserving seats is to persuade political parties to voluntarily keep at least one third of their seats for women. Predictably, given the resistance of many male politicians to the Women’s Reservation Bill, this idea has gone nowhere.  Until now, when the Congress party has made a start with one state – which happens to be the most populous state in India.

Given the dismal political outlook for the Congress party in UP, it is unlikely that that the women who are being fielded will win.  The choice of candidates is eclectic, ranging from experienced political hands to novices, including the mother of the survivor in a high profile rape case.  Yet, while this makes for interesting talking points, realistically it is unlikely to yield concrete political dividends.

Yet, even if none of the women fielded by the Congress party win, their very presence in the electoral fray is a reminder that more ways need to be found to give women an equal share in politics.  Although more women’s faces are seen in politics today than ever before, with several political parties putting forward women as their spokespersons, in reality there is only one woman heading a state, Mamata Banerjee in Bengal, and in the Lok Sabha, the representation of women is still only 14 per cent.

Just as women have been enthusiastic participants in panchayats and nagarpalikas, after the initial hesitation, one could argue that what the Congress party is doing in UP could be a trendsetter.

Even the process of standing for an election invariably changes the female candidate. The exposure builds confidence and prepares her for the challenges of being in politics.  It also alters how people perceive what women can and cannot do.

One party putting up more women in an election in one state might seem like nothing in the male-dominated Indian political scene. Yet, regardless of whether they win or lose, the 160 women candidates of the Congress party in UP might actually begin to dent the perception barrier of women in politics.

A Sidelong Reading List About The Sidelining Of KK Shailaja