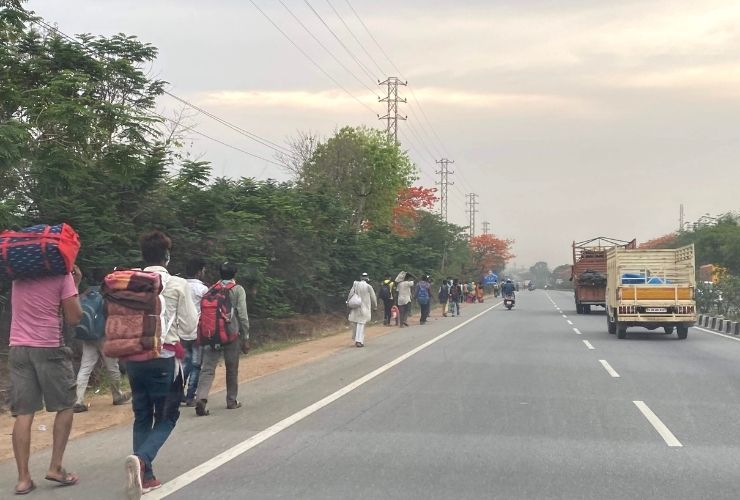 Hundreds of migrant workers walking to their homes on the highway

On the second day of the lockdown imposed nationwide by the central government in March 2020 to contain the spread of Covid-19, a friend tagged me on Facebook seeking help for a group of migrant workers on agricultural farms near my hometown, Kothagudem, in Telangana state.

I started making calls to anyone I thought could help and by night, I was part of a civil society group created that day to help stranded migrant workers in any possible way.

As helping them to get to their homes in towns and villages in different parts of the country was very difficult due to the ban on movement, we started supporting them with food in the form of dry rations. These workers, paid on a weekly basis, were left high and dry as there was no work and hence no pay. With no savings or security, they were in dire straits. As there was no other transportation, many began walking, desperate to get home. The first few days were chaotic as requests for help came in from everywhere and we were just about a dozen people starting out with zero resources. Each one of us in the group started raising funds from family and friends. By the end of the first week we had set up a helpline to receive requests and the number of volunteers increased to a hundred, channelising the requests to service providers and helping in any way they could.

Behind The Blue Sheets

Having a media accreditation card and a car with a Press sticker allowed me to drive to places further away to reach provisions to stranded people. My car soon smelt like a grocery store! Every day a friend and I would load the car with two weeks ration for 25 families and deliver it to needy people across the city. If the groups were bigger, the rations were sent in trucks.

The experience was an eye-opener for many of us, even for me, a journalist who has seen more than most about the inequalities in our country. We realised who is really building this nation and how the nation has dumped these, its true builders. The central government clearly didn’t care about the consequences of its actions in hastily imposing a lockdown without providing relief for the loss of jobs, and the states were engaged in guest vs host state politics and shifting the responsibility onto each other instead of helping out. We learned how and why workers from tribal states were employed in farming and construction work and were exploited. We learned for the first time how each sector engages people from a particular state: those from Chhattisgarh are engaged in construction, from Uttar Pradesh in wall paints, from Rajasthan in carpentry, Orissa in brick kilns, West Bengal in maggam (embroidery) work, and so on. Every sector had a story. It is the people behind the blue plastic sheets of their makeshift shelters who suffered the most.

The construction workers were mainly from tribal states such as Chhattisgarh and Jharkhand. As construction work had stopped even before the lockdown was imposed, they were due two or three weeks’ salary by the time of the lockdown. But no one asked for help. It is we who would go behind every blue plastic curtain on the road and ask if they were in need. They wouldn’t actively seek help because these communities have no experience of outside help including from the State. They wait without complaining and leave home at the first opportunity they get. The journalist in me was interested in these stories but writing wasn’t a priority then.

The major twist came when the lockdown was partially lifted. Most of the workers were desperate to go home. They had seen how people who died in the pandemic were treated, how even families couldn’t see them one last time. They just wanted to go home and die peacefully if they had to. But there was no transportation yet. Only goods trucks were allowed to ply on the highways. So they must either walk or get a place on a truck.

One of the groups of temporary migrant workers I was supporting from the beginning wanted to go home too. They faced immense difficulties because their documents such as Aadhar card and ration card were from their home states. There was a new-born baby among them, whose birth during the pandemic showed me how difficult it is for temporary migrant workers’ families to access pre-natal, birthing and neo-natal care and nutrition for children under various government schemes. Since I was unable to provide them safe transportation with proper police permissions, I took the seven-day-old baby and some other children in my car and accompanied them while they were walking 30 km to a highway junction on the outskirts of Hyderabad to get into empty goods trucks returning after their delivery.

I couldn’t believe what I was seeing on the way. There were hundreds of migrant workers walking to their homes in the scorching heat of May without access to water or food. Good Samaritan water points were not installed due to pandemic restrictions. I realised we were needed more here on the highway, and I posted this in the civil society group I was part of and announced that I would be in Medchal from the next day onwards.

Food Festival On The Highway

The next day half-a-dozen volunteers were on the highway with car loads of bread, bananas, water, etc. But the supplies vanished within minutes as thousands of people were converging here either to get into a truck or walk the hundreds of kilometres to reach their homes.

On the second day we contacted friends in the administration to provide tents and organise water and food for the retuning workers. Many good Samaritans working alone on the highway joined us and the tents soon came to be known as the Medchal Food Camps. When requests were put up on social media for food, the food started flooding in. By the third day we were feeding some 20,000 people a day and also handing them dry foods such as bread, fruits and water sufficient to last till they reached home. It was like a food festival with at least 15-20 varieties of food and drink coming from all corners. The Ramzan season had started and the non-profit Zakath Foundation in Hyderabad, hearing of our initiative, flooded our camp with fruits and drinks. A community kitchen was set up to augment the food coming to the camp. Two tents became ten tents, a medical camp was set up and the state Women and Child Development department set up a station at the camp to attend to the needs of children and pregnant women.

One very heartening thing I noticed at the camp was that the people who brought food or volunteered did not do it as if it was charity, but as if it was their duty to share what they had. Everyone used to think what is best for the workers, not what they could give. One person used to soak 100 kilos of Kabuli chana overnight and bring it along with top class jaggery as he was convinced it was necessary nourishment for travellers. That was his zakath (charitable) contribution. People would bring in hundreds of boiled eggs, some would stand for 10-15 hours serving food. One woman, a retired bank employee, would come by nine in the morning and leave at nine at night after continuously serving food. Some cooked tasty dishes every day, others brought chappals, or chocolates for the children. It was like an ongoing family function. The camp served food 24/7 for three weeks.

Send Them With Safety And Dignity

Once there was sufficient help at the camp, we started organising travel for the workers. We negotiated directly with truck companies in the beginning but later hired buses for the workers with women and children. We met many families and youths who had walked or hitch-hiked from Chennai and Bangalore and were headed for Chhattisgarh, Orissa, Uttar Pradesh, Madhya Pradesh. It was heartbreaking to meet workers and families who had walked for hundreds of kilometres yet would not sit and rest because they were afraid their muscles would seize up. We made sure they did not walk further.

To cut a long story short, the Food Camp fed or provided food for around 2.5 lakh workers for three weeks and organised 150 buses and many more trucks to transport them. All this was done without involving a single organisation or flaunting any banners advertising our work. The only two small banners we put up at the camp said: ‘Food and water is everybody’s right’, and ‘Send them home with safety and dignity’.

After we had set up the camp at Medchal, not a single worker went past it suffering from thirst and hunger in those three weeks.

–
C.Vanaja is an NWMI member and an independent journalist and filmmaker