Media Ethics, Portrayal of Women in the Media, Statements 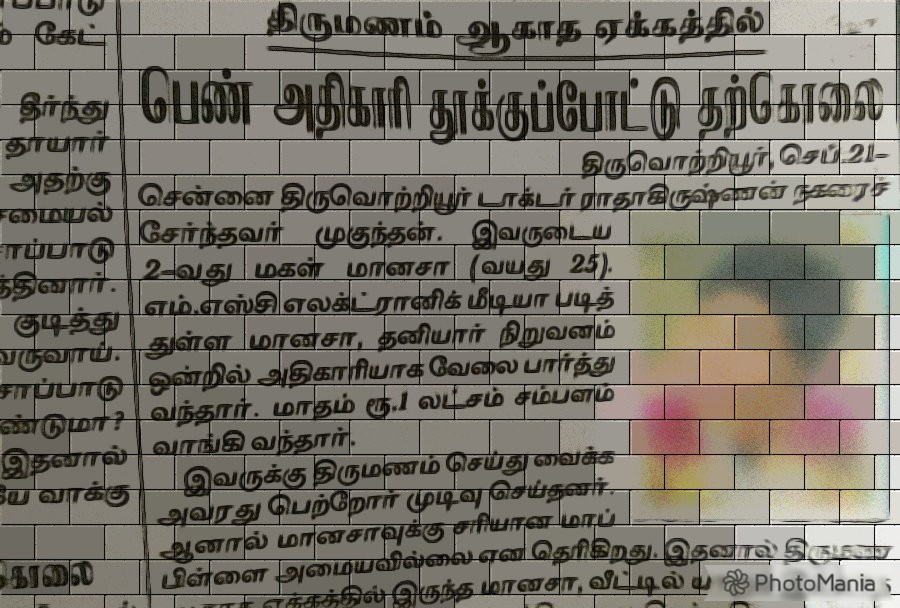 A statement by NWMI Chennai, endorsed by the rest of the network, and Tamil Nadu Women Journalists Association was sent to the editors of a Tamil daily which carried the news of the death by suicide of a young female journalist. The news item was sensationalist, violating guidelines of reporting suicides and, most egregiously, misrepresented the FIR to draw conclusions about the reasons for her suicide.

We are writing to you regarding the coverage of the tragic death by suicide of Manasa in your Chennai edition, dated Sept 21, 2021.

Manasa was a young journalist that some of us were acquainted with. But even if she was not someone from the media community, the way the newspaper has covered her death would have pained us both as women and as professionals.

To attribute the young woman’s extreme decision to her ‘desperation to get married’ is a grave injustice to the memory of the departed woman.

We have access to the FIR and we believe its contents have been grossly misinterpreted in this news item. In the FIR, Manasa’s father has said she became frustrated with their recent matchmaking endeavours that hadn’t yielded results. This in no way suggests that her ‘deep yearning to get married’ was what drove her to take her life.

A death by suicide can be the result of environmental as well as mental health factors. Distilling the complex motivations of a person in distress to a simplistic, singular and speculative ‘reason’ is something all media must be wary of doing. More so when this reason conveniently reinforces oppressive patriarchal notions, such as claiming that a young professional ended her life as she was unmarried.

Aside from being of questionable accuracy, this line of coverage does nothing but conform to problematic stereotyping of women and our aspirations. Further, the news article describes the method of Manasa’s death in the very headline, a violation of suicide reporting norms.

We request that you retract this news item, and publish an erratum quoting, with attribution, her father’s statement in the FIR.

We also request you include the contact numbers of suicide helplines, while publishing such reports. This is now standard practice among progressive and conscientious publications. We hope you will also have a discussion about incorporating this and other suicide reporting guidelines in your editorial policy.

We are writing to you in the hope that you recognise the responsibility of widely-read and influential publications like yours in reshaping outdated thoughts, as allies of women and other vulnerable sections of society.

Please refer to the guidelines on reporting suicide issued by the Press Council of India in 2019 – https://presscouncil.nic.in/WriteReadData/Pdf/PRtennineteentwenty.pdf

Here is a short, self-paced course on the reporting on suicides that might be useful to all journalists – https://cmhlp.org/course/suicide-reporting-course-for-journalists/

Editors Note: The newspaper has responded and promised to look into it and take action.