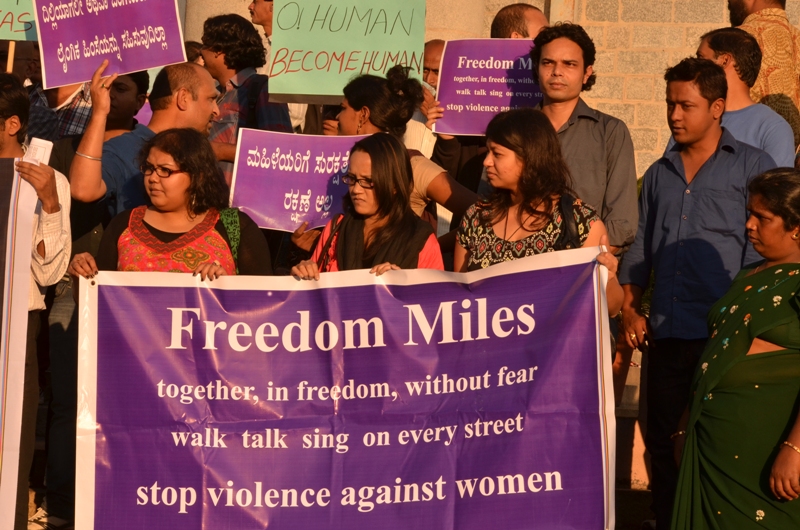 “The media must be part of the solution, not the problem”

The Network of Women in Media, India, celebrating its 10th anniversary at a national convention attended by about 80 media women from across the country, discussed various aspects of the theme, ‘Women, Violence and the Media,’ over a weekend meeting in Mumbai (1-3 February 2013). A public meeting on 2 February 2013 focussed on how the news media can better report issues of women, violence and public space.

Taking note of the public outrage over, and media coverage of, the recent brutal gang-rape and murder of a 23-year-old woman in Delhi, the NWMI expresses grave concern over the increasing incidence of violence against girls and women all across India, in public as well as private spaces. As women journalists we believe it is important to recognise that the Delhi case exposed only the tip of the iceberg of gender violence, much of which does not receive adequate media or public attention.

We appreciate the fact that the media responded to the gang-rape in Delhi and the public outcry that followed with prominent and largely sympathetic coverage.

However, we recognise that media coverage is often a double-edged sword. On the positive side, it increases public awareness about such crimes and puts pressure on the authorities to take action. On the negative side, incessant coverage of certain cases, particularly sensationalised cases of sexual violence, can obscure the widespread prevalence of many different forms of daily violence against women all over the country. Unless it is balanced and sensitively handled, such coverage can also be voyeuristic and titillating; it can increase the sense of vulnerability and insecurity among girls and women (including survivors of such violence), and lead to restrictions on their freedom and rights.

In addition, some of the media coverage in the immediate aftermath of the gang-rape in Delhi provoked and amplified strident calls for harsher punishments for such crimes – capital punishment, chemical castration, and so on – despite the fact that most women’s groups with long experience in dealing with gender violence have consistently cautioned against such kneejerk reactions that could worsen the situation.

We recall the thousands of girls and women all over the country who have been physically, sexually, psychologically abused and injured or killed. As journalists we urge the media to pay due attention to sexual violence perpetrated on Dalits and Adivasis, as well as women in militarised zones, where security forces are granted impunity by law.

We renew our commitment to working towards ensuring that media coverage of violence against women is more sensitive and nuanced, enabling victims and survivors to get justice in an environment where women feel safe and can exercise their right to equal citizenship.

Statement against sexist cartoon in Lakbima