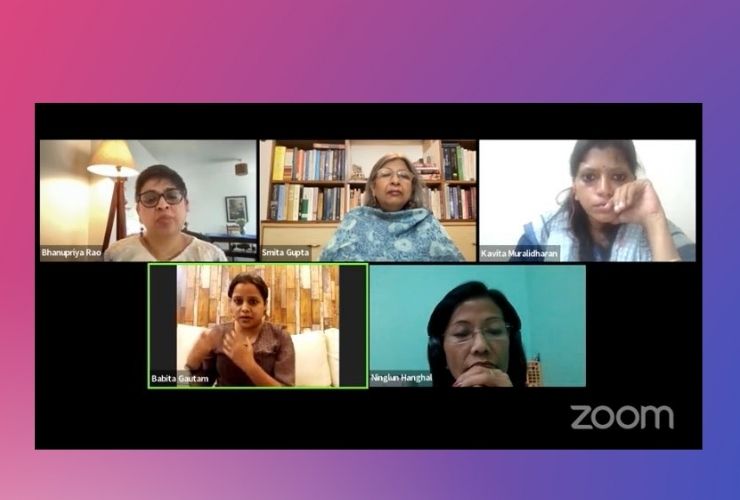 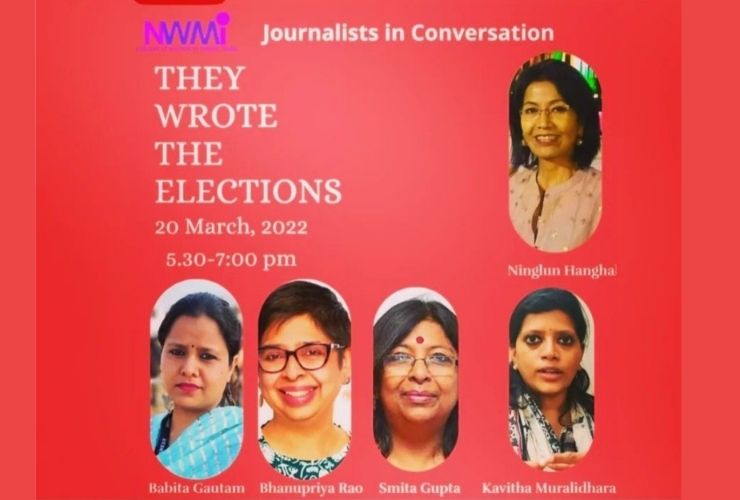 The panel, They Wrote The Elections, was organised on the third day of the 20th anniversary celebrations of the Network of Women in Media, India (NWMI) to talk about the coverage of elections by women journalists and to discuss how gender and caste lens were used for election reporting. How have things changed over the years or have they at all? The panel consisted of veteran journalists as well as new journalists to chart the historical trajectory of this coverage.

Journalist Smita Gupta started covering elections in 1984. In the panel, she said when she covered her first election, it was not because the reportage was assigned to her. The prevailing idea in newsrooms was that women did not just understand politics and if they were to cover elections it would be difficult because they cannot develop those necessary relations with politicians who were mostly male. She and her female colleague had to convince the editor to give them an opportunity and they did it by telling the editor they would travel on a lesser budget than their male colleagues.

Smita also reminded the audience that back when she was a young reporter there was no idea of ‘gendered reporting’ mainly because women hardly had the chance or inclination to articulate these issues. Women voters were usually not subjects of political reportage. And in the field when women voters were asked questions, they often directed reporters to speak to the men in their families. Women featured only in the rare, explicitly women-centred story.

In south India, in Tamil Nadu specifically, though, women were and are more articulate about issues, said independent journalist Kavitha Muralidharan. During both state and local body elections, women used these as opportunities to talk about issues such as water and welfare schemes and demands. Women also led many local level struggles and hence they had more voice and agency.

But the media’s coverage of women politicians still border on stereotypes such as when writing about R Priya, Chennai’s current mayor, said Muralidharan. Priya who is 28 and also Chennai’s first Dalit mayor has been written about as too young and inexperienced to handle issues, said Muralidharan. She said that we need new narratives that move beyond clothes and how women voters are outnumbering men to talk about their issues that affect them – such as access to education, water etc. Gender lens means not just women’s issues but how everything affects  women.

Journalist Ninglun Hangal talked about how the narrative in north-east India centered on the contradiction between the fact that women in the region ran establishments and led agitations but there are so few women making it to the top in politics. During elections, Hangal said, the coverage is on how women in colorful attires had made it to the polling booths and not much around the issues of women, especially in the rural areas. Women party workers form a bulk of political party mobilisers yet they remain invisible. This needs to change – the challenges of geography and access notwithstanding, said Hangal.

Babita Gautam, journalist founder of the The Voice/Voice Media, an independent Youtube channel covering issues of Dalit, Bahujan, Adivasis, spoke of the missing caste and gender lens in political coverage and how new age outlets like the Voice are trying to change that. Dalit, Bahujan and Adivasi women and their issues rarely figure in mainstream media, she said, because newsrooms are largely upper caste, even where women have a big role to play. She narrated how when she covered elections in UP and Punjab recently, women from Dalit communities talked about issues such as water, menstruation, fair wages etc and were baffled that a reporter even considered them worthy of having a conversation. This invisibilisation and frustration is what led a host of Dalit and Bahujan outlets to take matters in their own hands and use social media and channels like YouTube to tell their own stories. Once they have done that, mainstream media picks them up, rather halfheartedly, and makes a feeble attempt to cover them, she said.

All the panelists felt that the way to correct this and bring a more gendered lens to elections so that women’s issues figure at the heart of politics and policy is to collaborate between local and national outlets so that voices that matter get centerstage from the hinterlands.

This session was moderated by Bhanupriya Rao, founder of BehanBox, an independent media platform for gender journalism at the intersection of politics, policy, law and data.

To read more about gendered coverage of elections over the decades, head over to NWMI’s Gender and Elections blog.

BABITA GAUTAM is a journalist and the founding editor of The Voice Media. She’s working in the field of media for almost 6 years. She completed her early studies from Delhi and got a degree in Hindi Journalism from Jamia Millia Islamia. Babita has worked as a sub editor, producer, anchor and reporter in various news organisations like National Dastak, Niwaan Times, Daily Hunt, The Opera, and The Mooknayak.

KAVITHA MURALIDHARAN is a bilingual journalist from Tamil Nadu with two decades of experience covering a wide range of issues from politics to culture and cinema. She has worked with News Today, The Hindu group, India Today and The Week. She is at present an independent journalist contributing to major print and online news magazines. Kavitha volunteers with People’s Archive of Rural India as a translation coordinator and is currently a senior reporting fellow with PARI.

NINGLUN HANGHAL is a freelance journalist based in Imphal. She was a Laadli Media Fellow 2020. She was earlier Delhi Correspondent of The Sangai Express, a Manipur daily newspaper. At present she is Consulting Editor with The Northeast Stories, an online e-magazine. Ninglun writes for various media outlets, including the The Hindu Business Line, Money Control, The Statesman, Women’s Feature Services, The Third Pole, GenderIT.Org and EastMojo. She writes regularly on women, development and current affairs in Manipur and northeastern India.

SMITA GUPTA is a senior journalist who has been Associate Editor, The Hindu, and also worked with organisations like Outlook India, The Indian Express, The Times Of India and Hindustan Times. She’s a former Oxford Reuters Institute fellow.

BHANUPRIYA RAO is the founder of Behanbox, a digital platform for gender journalism. She has been an independent researcher and journalist writing on gender, governance and social justice. She is a passionate advocate for Open data and Right to Information and has worked globally across Asia, Africa and Europe on furthering transparency, accountability and democratic governance.