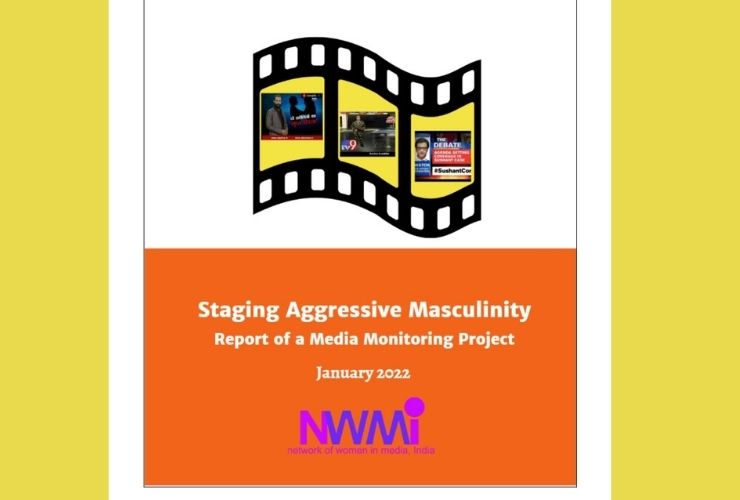 High decibel screeching and frenetic finger pointing seem to be the staple of daily television news channels today. Be it prime time news or talk shows, aggression and competitive intimidation are rife in an atmosphere where hostile behaviour is not only tolerated but also applauded. Indian democracy’s shift towards majoritarianism – a distinctly masculine project – is characterised by the suppression of dissent and the violent othering of marginalised groups. Such attitudes are reflected and propagated in the country’s weakening institutions, including the mainstream news media.

Alongside, the high level of aggression on social media normalises toxic masculinity, encouraging  users to drop their inhibitions and  ‘perform’ their masculinities through sexist, casteist and racist abuse, often accompanied by threats of violence, especially sexual violence.

Against this backdrop, the Network of Women in Media, India (NWMI), set out to understand how hegemonic and toxic masculinities are performed in news media, specifically television. Our critique is not of men, but of the hegemonic and toxic associations of masculinity with aggression, dominance, misogyny and, ultimately, violence. An in-depth analysis of behaviours that convey aggression (as opposed to assertion on the basis of evidence), dominance (as opposed to negotiation and cooperation), and sexism (as opposed to gender inclusion and respect), could allow us to formulate and promote alternative expressions of professionalism through example, training and mentorship.

This report describes the outcome of a multi-site study, monitoring journalistic performance of masculinities on 31 prime-time television news and talk shows in 12 Indian languages, including English. The study also undertook a limited analysis of social media posts to understand how masculinist discourse played out in these networks.

Here are some of our findings:

Audience research is required to test the veracity of  the common argument to justify the shouting matches that now pass for news television: that aggressive performativity begets greater viewership. The report offers a doable set of recommendations as well as a handy checklist for anchors and talk-show hosts.