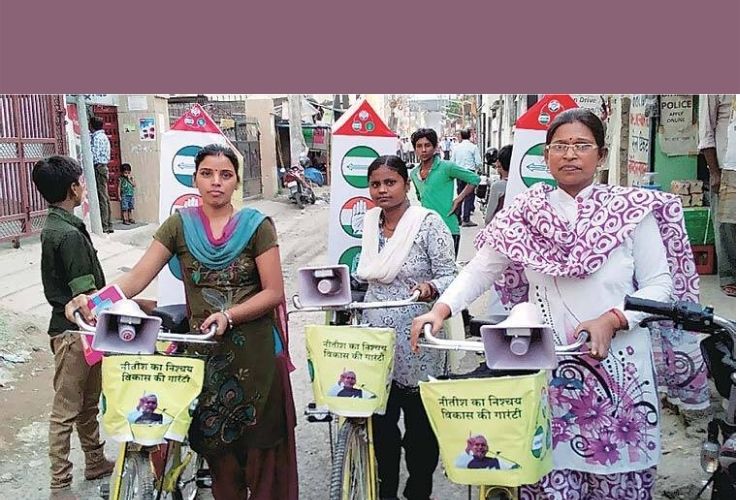 I have had the privilege of working with inspiring political leaders from the grassroots. They are in politics to serve. They are leaders from disadvantaged communities that have been underserved for generations. Seventy percent of the people we at Indian School of Democracy work with, are women. Strong, resilient, courageous and inspiring women. But how often do we see women in politics?

I was volunteering for the election campaign of a women parliamentarian in 2019. Despite the candidate being a woman, the campaign was run by men. I was among very few women, in a sea of men. It was disheartening because I knew this amazing parliamentarian inspired lakhs of women, but these women were restricted to the role of voters. I couldn’t help but ask my fellow campaigners who were men about why their sisters, partners, mothers, female friends were not on the streets with them. “It’s not safe, women are not made for politics, what will she do here? She can’t speak to strangers. If she comes, who will cook for me” were the standard responses. The irony of the situation didn’t escape me. Here they were asking voters to vote for a woman, but they couldn’t imagine women in their personal lives even volunteering. Policy cannot solve this problem and it’s crucial that we look at it from a sociological lens.

First, is the repelling masculinity of political spaces. How often have we heard that politics is a challenging game and not meant for women? During the 2019 Lok Sabha elections, Atishi (AAP candidate) was targeted just because she was contesting against a man. Pamphlets loaded with sexism and misogyny were published to discredit her personality; her character was targeted by raising aspersions over her “relationship” with a senior male AAP leader. Character assassination is one of the most used tools to discredit a woman in politics. This non-inclusive language is seen all over election rallies, campaign officers and any space that has political discussions.

Second is the (in)accessibility of spaces. Women are often considered as possessions and honour of the family. The problem arises when women decide to step out to other spaces. For example, there is a fear among the election contestants that women volunteers can be harassed to malign the candidate’s campaign and hence they don’t want to take the “risk” of including women in their campaigns. This fear perpetuates the stereotypes of politics being unsafe for women.

To add to this, basic facilities like toilets and safe sleeping spaces are often not available on campaign trails. Campaign trails that are mostly designed by men. I have volunteered on multiple campaigns myself and couldn’t find a dustbin to discard my sanitary pads, sometimes went for 10-12 hours without water in peak summer, just so that there wouldn’t be a need to use a toilet.

Third is the assumption that women can only mobilize women. Even when women are included in campaigns, they are tasked with mobilization of women voters only. In India, where there is stigmatization around a male-female relationship, it might be laborious for a male candidate to organize the women voters. As a last resort, he might seek the help of women members of his family to channel his cause. Even we have witnessed women primarily working with Mahila Morcha and not working directly with the candidate. Even in the campaigns of their own family members.

In the 2019 Lok Sabha elections, female voter turnout exceeded males. But women need to be looked at as more than voters. In the ‘festival of democracy,’ newspapers often capture women volunteers campaigning for different parties. Their pictures occupy the front page of most newspapers to signal women’s representation. How many of us wonder what is the actual role of such women volunteers at various party levels? How many women are actually given tickets? Abysmally low, as we know) How many women are in the “High Command” of parties where critical decisions are taken?

These are the critical areas that demand change if we want to see more women volunteers and hence more women candidates. Exposure to politics and elections is a critical factor in how interested women can be in contesting elections themselves. Our freedom struggles were stimulated by the spirit of women across regions and age groups. Where did we fail to convert this spirit into electoral politics?

Authors: Hemakshi Meghani and team at Indian School of Democracy (ISD). ISD is a non-partisan organization with a mission to nurture principled grassroots political leaders. They conduct short term and long term programs for aspiring political leaders, and all their programs have 50% women. Their program She Represents (applications for which are currently open) specifically focuses on preparing more women for politics.