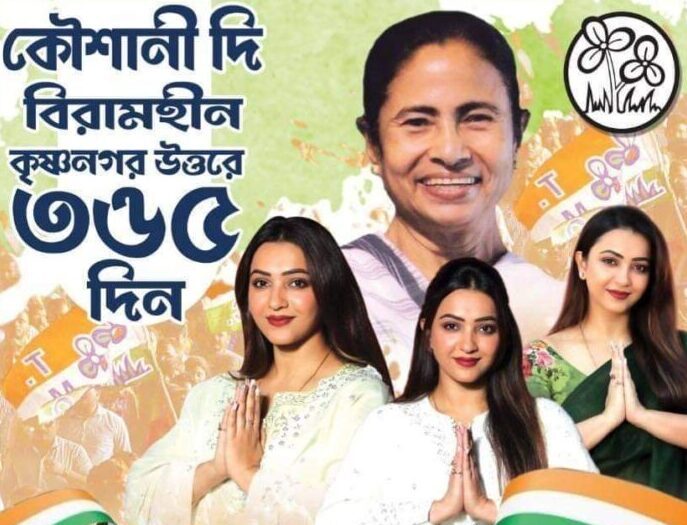 The young and the restless: New age election campaigns

“Sobaar kintu maa bon aachhe. Vote-taa bhebe dibi.” (Everyone has a mother and sister. Think before you cast your vote.)  These remarks by Trinamool Congress (TMC) candidate Kaushani Mukherjee during her campaign trail kicked up a lot of dust. The comment can be taken as a threat or as cautionary advice, depending on how one interprets it. The Bharatiya Janata Party (BJP), the TMC’s main political rivals in the ongoing battle for West Bengal, had uploaded it on social media to warn voters of the dire threat. The candidate, on the other hand, asserted that it was meant to caution voters about impending goondaism and gender-based violence by her rivals in case the TMC was not around to protect women in Bengal.

Whatever the underlying meaning of the uttered lines, it is worth addressing the question: have women really done very badly under the TMC?   The BJP is crying hoarse about the high rate of crimes against women in Bengal under the TMC regime. But is this true?

From all accounts, women do enjoy a far greater degree of safety and security in West Bengal than in most states of India, and particularly the Hindi belt states of Uttar Pradesh and Bihar. This is notwithstanding Mamata Banerjee’s outright dismissal of the Park Street rape case as a “sajano ghotona” (fake incident), and the brutal rape and murder of a young college student by goons owing allegiance to the ruling TMC not far from the state capital.

It is worth taking a look at statistics collated by the National Crimes Record Bureau (NCRB) to assess the situation. If the total rate of “Crimes Against Women” in West Bengal is taken into consideration, the crime rate (per one lakh population) dropped from 70.3 in 2012 to 64.0 in 2018. Although West Bengal did clock high rates of domestic violence, with the incidence recorded by the NCRB at 42 cases per one lakh population, there has been a 20 per cent drop in the figures from 2012 to 2018.  On the other hand, the Hindi belt states of Rajasthan and Uttar Pradesh had the notorious distinction of clocking nearly 18,500 cases in 2019 (Rajasthan: 18,432, UP: 18,304), thereby topping the list; West Bengal registered 16,951 cases.

In the matter of human trafficking, too, West Bengal has always fared the worst of all Indian states, at least partly due to its location on the cusp of several international borders.   However, there has been a decline of 84 per cent from 2014 to 2018 — with cases dropping from a high of 1096 to 172.  This is partly due to the state government’s State Action Plan for Children, launched in 2014 to look into the implementation of central and state government schemes for children, besides focusing on tackling the large-scale trafficking of minors. The setting up of a Directorate of Child Rights and Trafficking to focus on human trafficking has also helped bring about a steep decline in trafficking under the TMC government.

In fact, according to NCRB data, Kolkata was the safest city in India two years in a row (2017and 2018), with the lowest number of cognisable offences. In 2016, Kolkata had recorded just four per cent of the total cases of crimes against women and was considered one of the country’s safest cities, along with two other contenders.

Of course, crime, and the incidence of it, cannot be the sole yardstick by which to determine the status of women in West Bengal. In this context the initiatives taken by Mamata Banerjee-led TMC government to ensure a better future for girls and women are significant.

For example, the Nija Griha, Nija Bhoomi scheme launched by the state government in 2011 for marginal farmers and rural households with less than three bighas of land was an important development that deserves a lot more attention than it has garnered so far. Under the scheme, for the first time ever, women were granted pattas to micro-plots jointly with men. Although it is not the first time that micro-plots have been granted to poor rural families (the Left Front government had launched a scheme in 2006 wherein poor families were identified and provided with small plots for cultivation and dwellings), the TMC government brought in a minor revolution by granting joint pattas to women. Since most rural women are semi-literate, or just able to write their names, the scheme was accompanied by legal literacy classes for women, conducted by the Department of Land & Land Reforms with the help of civil society volunteers. This involved teaching women how to read and interpret pattas so that they can understand their legal rights to land. At one stroke, the scheme not only empowered women and granted them a feeling of self-worth, but did away with the kind of destitution women often faced when a man died or deserted them.

The TMC government also had a winner in its Girls Project, which is an integration of its Kanyashree Prakalpa scheme with the Central Government’s Sabla scheme.  This project combines financial assistance, health and educational initiatives with vocational training for girls aged 11-18 years of age. Girls are taught how to grow vegetables, fruits and medicinal plants in order to earn at least small incomes that can enable them to become independent and push back family attempts at early marriage. Handled by ICDS centres, the project imparts knowledge on nutrition, land rights and gender parity to pre-teens and adolescents, while teaching them life skills such as how to open bank accounts, make complaints at police stations, and monitor their own health. The ICDS centres provide the adolescents with folic acid and iron tablets, and conduct health check-ups and blood tests every quarter. Their heath status is recorded and monitored through Kishori cards distributed to the girls. Under the Kanyashree scheme, every girl receives Rs 750 a year, followed by a lump sum of Rs 25,000 when she turns 18. The money the girls earn by selling vegetables and fruit, together with the financial assistance received, serve as a buffer to prevent child marriage, and helps educate and empower them. The Sabla-cum-Kanyashree scheme has proved extremely successful, imparting financial independence to more than 9.5 lakh young girls ever since it was set in motion.

The app-based Swasthya Saathi scheme, which was introduced in lieu of the Central Government’s Ayush venture, aims at universal health insurance for all families in the state up to an amount of Rs 5 lakh and enrols households through women. Although the scheme has invited criticism from activists on many counts, it remains popular in rural and semi-urban parts of West Bengal, and is refreshingly different in that it recognises women’s roles and contributions in households.

The Rupashree Prakalpa, wherein poor families are given a lump sum of Rs 25,000 at the time of their daughters’ marriage, has also been well-received, even though one could question the focus on girls’ marriage, especially in the context of other initiatives meant to economically empower young women.

The TMC has certainly been beset by more than its fair share of notoriety through the Saradha, Narada, and (most recent) coal scams. Extortion and political violence, too, have been part and parcel of its rule in West Bengal – although, to be honest, these ills are a spillover from earlier decades when the Communist Party of India (CPI[M]) and the Indian National Congress (INC) held sway.

It is important to note that there is some discrepancy between NCRB data relating to the prevalence of violence, especially political violence, in the state and the figures made public by the Union Home Ministry.  The NCRB collates crime data from all states and regularly publishes comprehensive reports. According to a senior Home Ministry official quoted in The Hindu’s report, “The Ministry has its own mechanism of collating such data… (it) also has other means.”

Irrespective of data discrepancies, the score card of the Mamata Banerjee led government in terms of its efforts to improve the status and lives of women and girls in the state deserves closer inspection if she and her party are to be fairly judged.

The young and the restless: New age election campaigns