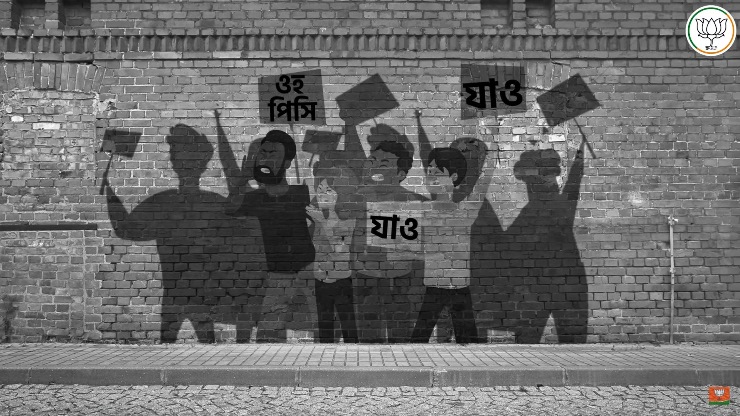 Do you remember the jingles, ‘Surobhito Antiseptic Cream Boroline’ or ‘Washing Powder Nirma’? Jingles that went viral (in the days when the term was used for medical purpose only) and resulted in the coin box jingling for their manufacturers? Interestingly, in the run-up to the ongoing state elections in West Bengal, political parties, too, have realised the efficacy of rehashing popular tunes and jingles to remain at the top of people’s mind.

Take the by now all too familiar slogan, ‘khela hobe’ (literal translation: game is on). Part of a jingle created by Debangshu Bhattacharya, a Trinamool Congress (TMC) spokesperson in his 20s and general secretary of the party’s youth wing, the phrase has now virtually become a war cry between rivals TMC and the BJP.

Interestingly, the Communist Party of India-Marxist (CPI-M) – once known for its serious demeanour – has also joined the bandwagon.

When a remixed version of a popular Bengali song, ‘Tumpa Sona’, aiming to draw people to attend the “Brigade rally” in late February (in anticipation of the upcoming state elections) went viral – shared even by party veterans such as Suryakanta Mishra and Sujan Chakrabarty), it took Bengalis a while to digest the fact that this was part of the campaign of a party long known for its sober disposition.

The remixed number became so popular that it was further recreated post the rally at the Brigade Parade Grounds, asking voters to vote for the Left Front-Congress alliance. The original song is an ardent plea by a hapless lover to his beloved Tumpa to marry him. The witty remix has the lover pointing out opposition parties’ faults and pleading with Tumpa to accompany him to vote for the Left alliance.

In the run-up to the rally, on a pleasant afternoon in February, there was quite a crowd in front of Kolkata’s famous Victoria Memorial as families with children, young couples, and even tourists, streamed in and out of the gates. Suddenly, a group of young men and women emerged from the crowd and broke into a flash dance. People stopped to watch and then realised the performers had a political message to deliver: why it was necessary to join the Brigade rally.

To the people gathered around the young performers this was a pleasant surprise, conditioned as they were to noisy, often muscle-flexing, political meetings. Unlike on most street corners, where people barely stop to listen these days, the performers had managed to grab the attention of most present.

No matter what the results of the West Bengal Assembly elections turn out to be, it is certain that the face of election campaigning in the state, once known for its creative graffiti and limerick style slogans, has now changed, having shifted to new age media and methods, both digital and creative. According to many experts, this change has been possible because the parties have opened their doors to the younger generation.

In this context, it is not surprising that in the CPI-M, which has fielded many youngsters in this election, including some very notable names, campaigning has taken a fresh direction.

According to Mohammed Salim, a Politburo member from West Bengal, who also heads the social media team, quoted in a March 2021 report in The New Indian Express, “The Left in its alliance with the Congress and the Indian Secular Front (ISF) will field at least 40-50 per cent young leaders. The youth is with us. Take the rally for example, thousands of young people marched up to the Brigade grounds.”

From Srijan Bhattacharya, a 27-year-old member of the Student Federation of India (SFI), who was a teenager when Singur erupted, to Aishe Ghosh, 26, currently president of the Jawaharlal Nehru University Students Union (JNUSU) and an activist who hit the headlines after being attacked on campus allegedly by members of the ABVP, the Left Front has fielded several candidates in their 20s and 30s. Incidentally, former JNUSU leader, Dipsita Dhar, is also a key candidate in this election.

More than a year ago Dhar was quoted by The Hindu Businessline as saying, “A lot of people stay away from politics because they think there’s something dark about engaging with it. But music lifts the seriousness and helps more people connect with a political cause.”

This is something the party evidently took to heart during this election, with its social media wing remixing peppy tunes.  Popular Bollywood number ‘Lungi Dance’ became ‘Lal Pherao’ (Bring Back Red) and the popular Bengali number, ‘O Ki Lagchhe’ (Looking Great), was recast to refer to the party’s red flag.  The tunes were matched with equally appealing cartoons for audio visual media.