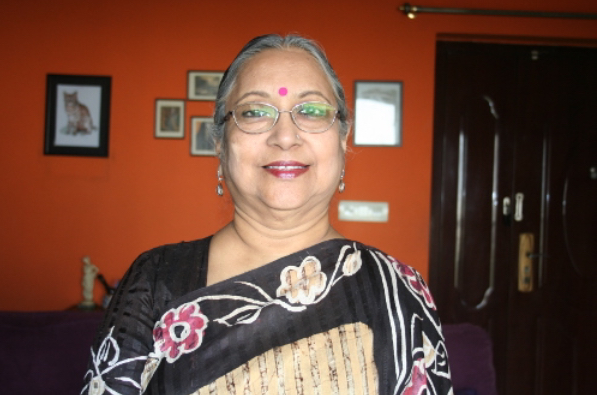 Members of NWMI’s Bengal chapter had a fruitful discussion on women’s rights, and gained valuable insights on the condition of women in neighbouring Bangladesh, from journalist and author Urmi Rahman at an informal meeting held on March 16, 2012 in Kolkata.

Urmi Rahman started her journalistic career with Dainik Sangbad in Dhaka, Bangladesh in the early 1970s. In 1984, she went on to work with the BBC World Service, London as a producer-broadcaster with its Bengali Service. Thereafter, she moved on to work for the local government in London, as a language project officer with The Language Shop, London Borough of Newham, co-ordinating translations in over 60 languages. She is the author of three collections of short stories and several children’s books in Bengali. Ms Rahman has now retired and lives in Kolkata with her Indian-born husband, Sagar Chowdhury. She continues to write for several newspapers and journals and is currently busy writing a book.

It was interesting to learn from Ms Rahman about the inadequacies of the law in ensuring women’s empowerment in Bangladesh. Drawing partly on her own experience, she told us how the Sharia-based laws of Bangladesh allow a divorced woman custody of her son only until he is seven years of age and her daughter till puberty, after which she must surrender her child to her husband. We learnt about the landmark legislation introduced by Ayub Khan in 1961, wherein Muslim women, for the first time ever, got the right to divorce their husbands, albeit as a privilege bestowed on them by their spouses.

However, there remains a flaw therein. Unless the girl’s family includes this in the nikaah certificate, it is difficult for a woman to divorce her husband; she must go to court and prove that her husband is either insane, suffering from an incurable disease or guilty of adultery. At the same time, Hindu marriages cannot be registered, and Hindu women do not have any property rights. There is nothing to prevent Hindu men from marrying several times. Muslim men, on the other hand, need to get the permission of their first wife, and must also face an arbitration council (in one or two villages these are run by women) to get permission for a second marriage. Of course, it was heartening to learn that some women’s groups such as the Mahila Parishad- the largest in Bangladesh-are currently campaigning for a better deal for Hindu women in this regard.

Bangladesh, we learnt, has already passed legislation against domestic violence and rape. But many women are unaware of their legal rights, and the desired effect on women’s empowerment is yet to take off. Marital rape is also emerging as an issue, Rehman told us. But dowry, which had no place in Islam, is a major problem today, as it has become among Indian Muslims too. Child marriage and death by stoning on the basis of fatwas issued by village “courts” are also a matter of concern, according to Rehman. (Incidentally, these extra-judicial courts presided by local mullahs have been banned by the High Court in 2010. Yet, they continue to function and hand out judgements on what they claim is Sharia law). Trafficking of women is also posing many problems, especially where it is to the west Asia. This is again related to other issues like child marriage. Women’s groups are trying to tackle this complicated problem with the help of the authorities in Bangladesh.

Ms Rahman, who has been a part of the anti-fundamentalism campaign, and the Nirmul Committee, also dismissed Taslima Nasreen’s advocacy of women’s rights and anti-fundamentalism. The veteran journalist remarked, “Nasreen has had numerous opportunities to make a plea for the same when she was sent by the government abroad. But she has only spoken about and promoted herself.” Of course, the Bangladeshi intelligentsia is all for freedom of speech, and hence does not speak out against her at any stage, lest it dilute the cause we believed in. “But women’s rights have never concerned her. She has only believed in talking about herself,” Rahman added.

Ms Rahman had a lot to tell us about the rising fundamentalism in Bangladesh, and its repercussions on the minorities. The writer observed, “The commoner in Bangladesh is not a fundamentalist. Bangladeshi society has always been secular. At the time of Partition, and even until the 1980s, there was a sizeable Hindu population, with a good number of Christians and Buddhists thrown in. But political backing of fundamentalist elements has seen the minority population dwindle to around 10 per cent now.”

Book on riot survivors released by Justice Srikrishna in Mumbai