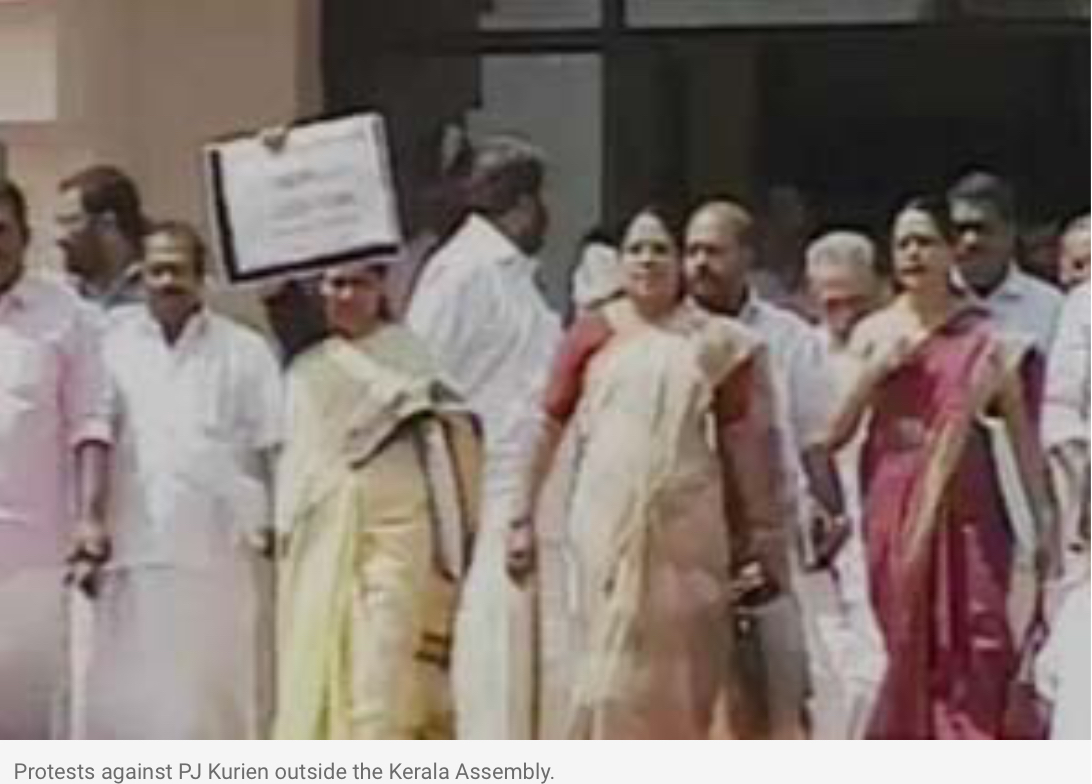 A meeting of women activists, lawyers and mediapersons to discuss the Suryanelli case verdict was held at YMCA Hall, Ernakulam on Sunday, 6 February 2005. The meeting was organised under the banner of Sthree Chethana, with the active participation of the NWM-Kerala in Kochi.

The programme had begun with a skit presented by a group of women including Asha Joseph, Sreelatha, Seena, Ashadevi and Jeeva.

The meeting was convened in the background of the recent verdict given by a two-member Division Bench of the Kerala High Court on a sex racket case, popularly known as the Suryanelli sex racket case in which a school girl was sexually exploited by several men continuously for 40 days. The incident happened in 1996. A total number of 36 persons were accused in the case. A Special Court set up by the Government (the first ever Special Court set up in the State for such a case), had convicted all the accused. But, the Division Bench, consisting of Justice K.A. Abdul Gafoor and Justice R.Basanth exonerated all but one of the accused.

The judgement has given rise to widespread protests from various women’s organisations and human rights organisations. A meeting of Kerala Sthree Vedi, an umbrella organisation of women’s groups in Kerala, held on 5 February, at Ernakulam had decided to take upon the responsibility of filing appeal at the Supreme Court against the High Court verdict. They had formed a defense committee for raising the finances for the case, for providing moral support to the victim and her family and for conducting a media campaign in support of the victim.

Sunday’s meeting also expressed solidarity with the Sthree Vedi’s move to seek appeal at the Supreme Court. The participants deliberated upon the various aspects of the judgement. However, since a copy of the judgement was not yet available, a detailed discussion on it could not be held. The panellists were Prof. Meenakshi Thampan, CPI leader, former MLA and the State president of Kerala Mahila Sangham, Adv. T.B. Mini, leader of CPI- (M) Red Flag and Janadhipathya Mahila Sanghatana, P. Rajan, a senior journalist, Soubhagya, activist of Mahila Samskarika Sanghatana, Prasanna, Reporter of Kerala Mid-Day Times and Dr. K.S. David, a psychiatrist. The discussions were moderated by Seena Bhaskar, an anchorperson with Jeevan TV.

The general view that arose during the discussions was that maximum pressure should be put on the State Government to go for a Supreme Court appeal. The Chief Minister Oommen Chandy had, on 22 January, stated that the Government was in no hurry’ regarding the future course of action in the case. Many speakers at the meeting pointed out that it was the State Government’s responsibility to fight for the interests of the victim.

Prof. Meenakshi Thampan, while demanding that the State Government should go for appeal, expressed doubts whether the Government would take a genuine interest in pursuing the case wholeheartedly, especially considering the history of the case so far as well as the CM’s response. Prof. Thampan reminded that about two decades ago, there was a nation-wide protest and agitation in the wake of the Mathura case. The case had brought rape on to the public agenda in the 1980s. A 17-year-old tribal girl was raped by local policemen in the station near Mumbai. The rapists were subsequently acquitted. This resulted in nation-wide protests, which finally led to significant changes in the Criminal Procedure Code and the Indian Penal Code, especially shifting the onus of proof onto the accused in custodial rape.

Adv. Mini demanded that the Government can not shirk away its responsibility of appealing. She cited a couple of errors that the prosecution had committed in producing some key documents before the Special Court that had become decisive in determining the case’s direction.

Prasanna, who had visited the girl recently, pointed out that the media should take care to avoid causing more distress to the victim’s family. P. Rajan pointed out that since we have no option but to seek a redressal within the purview of the existing system of judiciary, we cannot but point out some of its inherent contradictions. He criticised the general attitude of the society for idealising the concept of romantic love’ while denigrating the aspect of sexuality. He also pointed out that democracy as such had never been a woman-friendly system.

It was decided to form a core group that would function at the district-level for offering professional and moral support to victims of sexual exploitation and harassment cases. The group consists of doctors, lawyers, counsellors, activists and media persons.

Other voices on the reservation controversy