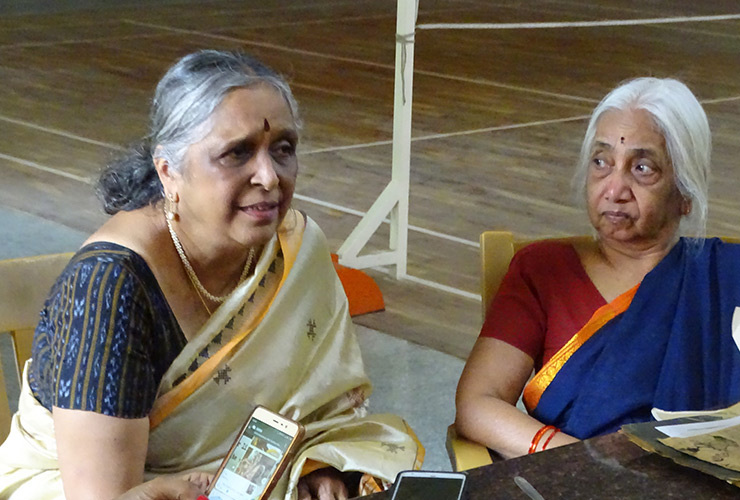 On June 10, 2017, the Bangalore chapter of the Network of Women in the Media-India felicitated Gita Aravamudan and Sakuntala Narasimhan on their completion of 50 years each in the field of journalism.

Feisty and brimming with passion for her craft, Sakuntala Narasimhan holds up a yellowing paper pasted carefully on a backing. “This is my first article, published in July 1966,” she tells a rapt audience of fellow members of the Bangalore chapter of the Network of Women in Media NWMB). She has as many as 3,950 published pieces, all neatly stored in box files – a stupendous number of articles for a trained musician who gave her first public performance at the age of three and her first broadcast at 10.

“I came to journalism by sheer accident,” she says. “My parents wanted me to be a musician, I wanted to be an IAS officer, my professor wanted me to be an economist. But I was the eldest of four siblings, my brothers were still in school or college, my father had retired, so my parents decided I had to be ‘married off’. With a husband who expected his wife to cook and keep house without help, I had to abandon my music, economics research (despite having secured a UGC Fellowship) and IAS ambitions (married women were not allowed in the IAS in 1962). So in desperation I turned to writing which could be done with a baby on my hands, even with splintered time.”

And so it was that after marriage, Sakuntala took up the challenge of running a house. Having never had much to do with domesticity, her first forays into the kitchen were a disaster, from charred beans to watery okra. With a premature baby to deal with, her plans to do her PhD in Economics could not materialise. Instead, she began writing. With no money for paper, she wrote on the back of used envelopes. In July 1966, her story ‘The Beauty Contest’ was published in Femina and she was paid the princely sum of Rs 30. She went on to get published in The Hindu a month later, a confidence booster which allowed her to think she had a career in writing. ‘Their Myriad Ways’, published in Femina in 1967, a story which Sakuntala describes as “somewhat maudlin” went on to win a prize – an occasion that she says caused her to jump four feet in the air. And then, there was no looking back. She wrote on women’s issues, mostly drawing on personal experiences.

“I must thank KN Harikumar, editor of the Deccan Herald for giving me a break and then encouraging me to do a regular column,” she says. He sent her to Beijing to cover the 1995 UN World Conference on Women (where she met Ammu Joseph!). “Journalism resurrected me,” says Sakuntala, and describes it as an ideal profession for those with splintered time. As a columnist Sakuntala won many awards, including the Chameli Devi Award for an Outstanding Woman Journalist.

Recounting some of the interesting stories she did, Sakuntala reminisces about climbing up a tree at the age of 60, in order to get a better photograph of the inside of a Coca Cola factory in Plachimada, to get evidence of bottles still being taken out of the premises despite a ban order. In 1990 in Assam, she interviewed a member of the banned ULFA: “A very nice young boy”. Sakuntala had a knack of getting to the heart of the story, whether it involved living for a few days with the Lambadis (a nomadic tribe) in the Araku Valley of Andhra Pradesh or pretending to be pregnant to gain entry into the burns ward in JJ Hospital in Bombay for a story on the state of public hospitals.

Besides being a prolific writer, Sakuntala pursued her academic interests and in 1996, she got her first PhD in Sociology. And not one to rest on her laurels, she got another PhD in music, completely making up for having left college young.

Not a profession for girls?

Gita Aravamudan, who also left college at 19, was clear that she wanted to become a journalist. However, one of the first people she met through her aunt Devaki Jain was Prem Shankar Jha, who said, “How can she be a journalist? She’s a woman!” She was in total shock, she says, because her parents always encouraged her to do anything she wanted to.

Gita got admission in Miranda House, Delhi, but stayed home in Kolar Gold Fields (KGF) to help the family as her mother was ill. At the time the iconic JS (Junior Statesman) had just launched, with the famous Desmond Doig at the helm. “I began writing – mostly light-hearted pieces. I remember one piece I wrote was ‘My experiences as a walking step ladder’, describing how everyone asked me to fetch things for them because I was tall,” says Gita. Jug Suraiya and his wife Bunny and Bachi Karkaria also started off their journalistic careers by writing for JS around the same time.

Her quest for a job in journalism took her to Bombay, where she walked into the offices of The Times of India. “One guy said: ‘you’re a girl, why don’t you try advertising?’ “Then I got a chance to go to Delhi and work at the Hindustan Times (HT) for two months as a trainee, sitting at the desk. This was in 1967, and there was only one woman reporter in HT – Prabha Dutt (nee Behl), Barkha Dutt’s mother. At the time, Usha Rai was working at the Times of India. Both of them took me under their wing.”

Gita persisted in trying to report and write and ultimately, she did get her first story published in HT – it was about a Western man, a hippie, who was very good looking and was found begging. “I got another good break when Prabha went on leave and Pierre Cardin came to town,” she said. “I was fortunate that the chief reporter knew nothing about fashion. So when Pierre Cardin was down, he packed me off to get an interview. The other publications had sent senior reporters and I didn’t get a chance. But I got to talk to the models and so I got a great story. So then I got sent to cover the fashion show. And guess who was sitting right near me – Rajiv Gandhi and Sonia, who’d got married a few days before!” It was something to write home about.

HT at the time was in the throes of an agitation for implementation of the recommendations of the Wage Board for Working Journalists, so no new recruitments were being made. Upon her return to Bangalore, Gita joined the desk at the Indian Express under chief reporter VN Subba Rao and VK Rajagopalan the news editor. “Both of them were very kind to me. They took care to see I reached home safe even if it was midnight and so I often ended up getting dropped home in the van which carried the Tumkur edition, as my house was on the way!” She was earning Rs 250 a month. Meanwhile, vacancies at HT in Delhi opened up and she was offered a job for Rs 400, but she decided to continue with the Indian Express job. “Subba Rao encouraged me and sent me everywhere – the Ikebana and beauty contests, but also to cover politics. By the way, my male colleagues were dying to cover the beauty contests!” She had a column ‘Week by Week’, which featured interesting personalities. Sakuntala Narasimhan’s young brother Raj Narain, inventor of the electronic Shruthi Box Radel, was featured in this column. “And then I did what good girls do – I got married… to a husband who was married to rockets,” says Gita, who was 23 at the time. She moved to Trivandrum with her scientist husband and began writing again for JS, Youth Times and The Illustrated Weekly. The Hindu started giving her small assignments, which at the time paid Rs 30 for short pieces and Rs 50 for long pieces.

Since there were very few English language journalists in Trivandrum then, she slowly managed to build up a list of publications which would assign her work. “I decided not to be picky, and wrote for Femina, Savvy, Eve’s Weekly, Patriot and the Economic and Political Weekly and even the Blitz and Current on a range of issues,” says Gita. “I also wrote a lot on Malayalam films for Bombay-based publications like Filmfare and Screen.” After the Emergency, many new magazines too came up and she started writing for India Today and Sunday. VN Subba Rao quit the Indian Express and became editor for Sunday Midday. He commissioned a number Gita’s articles and many of them were carried on the front page. In a tip to younger journalists, Gita says that she learnt to tailor her articles to each publication by asking herself the question “What does the reader of this publication want?”

She wrote about the Thangamani incident in 1986 where women had been raped en masse by the police as a punishment because the men had fled the village after a riot. The Week gave her space for investigative pieces, and in the early 1990s, Gita travelled to Usilampatti to investigate female infanticide. She also recounted exciting moments on a trip with Ammu Joseph to Dharmapuri in the late 1990s to look into female infanticide/sex selective abortion in the district and find out if the TN government’s efforts to deal with the problem was working. Her engagement with the issue culminated in the publication of her book Disappearing Daughters in 2007. She continues to write on the subject even now. She now specialises in writing articles and books on gender issues.

Hearing the stories of these path breakers was revealing, especially for younger women journalists who have joined the profession more recently. Melanie Kumar, Coordinator of the NWMB, and other members felicitated Gita and Sakuntala with traditional shawls, sandalwood garlands and boxes of dry fruits, and the badminton court at the Press Club of Bangalore (the meeting venue, arranged for by NWMB members Shamanthaka Mani and Susheela Nair) resounded with applause. Crisp dosas, hot coffee and almond biscuits (provided by Sakuntala) were a fitting end to an inspiring afternoon.