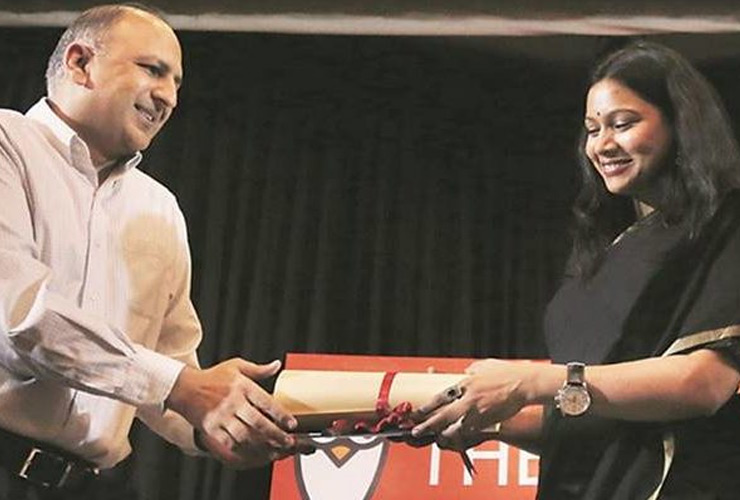 An attempt to get women’s voices. But not enough

The Chameli Devi Jain Award for an Outstanding Woman Journalist for the year 2016 was given to independent journalist Neha Dixi on March 1, 2017, at a function at the Indian International Centre, Delhii. Ms Dixit has worked for print, television and online media and written for several publications including Outlook, Caravan, Himal, Al Jazeera, New York Times, Foreign Policy and Tehelka. She was the recipient in 2010 of the Anupama Jayaraman Award, an initiative of the Jayaraman family supported by NWMI to nurture young journalists. She received the Chameli Devi Jain Award for an impressive body of work covering vital issues relating to politics, gender and social justice that create a new awareness of ground realities in Indian democracy. Her acceptance speech:

After being called an antinational for months on end, it is nice to receive an award that is named after a freedom fighter. Thanks to the jury and the organisers. On 29 July, last year, I published a story in Outlook magazine called ‘Operation Babylift,’ a story that took three long months of painstaking reportage. It exposed how 31 tribal girls, between three and eleven years of age, from five border districts of Assam in Northeast India, were illegally taken to Punjab and Gujarat by three Rashtriya Swayam Sevak (RSS) affiliated outfits, namely the Rashtra Sevika Samiti, Sewa Bharati and Vidya Bharti. The girls, all from remote villages, were taken away from their parents in June 2015 with the promise that they would be educated for free. But since they left their parents have not heard from them. Various government statutory bodies like the Child Welfare Committee, the Assam State Commission for Protection of Child Rights, Childline India Foundation, under the Ministry of Women and Child Development, had written several letters to various RSS outfits, and also the National Commission for Protection of Child Rights under the Central government, in a bid to return the girls to their parents. The letters cited the violation of several Indian and international child-rights laws and they officially termed the episode as “child trafficking”.

Once the story was published, it was widely read and circulated, garnering a huge online readership. In response, the RSS and Bharatiya Janata Party (BJP) members and office bearers used empty rhetoric to eulogise RSS outfits instead of countering facts with facts. They indulged in mudslinging, name-calling and one of the official rebuttals spoke about my “depraved mind”, questioning my intention behind covering the story. And then came the news that the Assistant Solicitor General of the Guwahati High Court and a few BJP members had registered a police complaint against me, and the editor and publisher of Outlook magazine for “inciting communal hatred amongst communities” by selectively quoting the concluding paragraph of my story.

In the last 10 years of my journalism career, I have covered child trafficking extensively. In 2010, when I wrote about child trafficking by some madrassas in North Delhi running sweatshops inside their compounds, it was a crime story for me and my editors. After the story was published, over 250 children were rescued. Similarly, in 2011, I did a story in the dense Saranda forests at the Odisha-Jharkhand border on the training camps of child soldiers by several Maoist groups. These articles won national and international awards and I wasn’t branded a Hindu fundamentalist Sanghi, a rabid nationalist or a capitalist thug for covering these stories. The difference in reaction to these two stories and the RSS story raises two very pressing questions – are journalistic duties subject to the whims of political regimes in power? And how can political regimes remain unaccountable for curbing the basic freedom of expression?

Within a week of the reporting of the story and the subsequent media reports about the case filed against me and Outlook, the actual issue of the girls being trafficked was submerged in debates about my credentials as a reporter, my character and my ‘intentions’ behind doing the story and the reasons behind Outlook publishing it. Soon after, the Outlook editor, Krishna Prasad, was replaced by the magazine’s publishers without any public explanation. Instead of media outlets following up on the criminal activities of the RSS cadre and building pressure so that the marginalised, tribal parents could be reunited with their daughters, we – the journalist, the editor and the publisher – became the story instead. Even public discourse, after it shifted to debates about freedom of speech, became a handy tool to completely divert attention from the actual issue of marginalisation and criminality.

No woman writer, journalist or artist is untouched by such attacks by online trolls. In the past, I have had dedicated forums strategising about how I should be beaten “black and blue” when I reported on Khap panchayats. I have also received rape threats, often describing how thorny sticks or sharp metal rods should be shoved inside my private parts when I wrote about bride trafficking in North India. When I reported on ‘love jihad’, I was called a “member of Lashkar-e-Taiba”, and when I wrote about Hindutva-driven nationalism, I was called a “concubine of Rahul Gandhi”. Sexually explicit abuses and pictures of human private parts often land up in my inbox. When this is the response for a watertight story, it can be unnerving for a reporter. It can, in many cases, intimidate reporters enough to shut them up.

In the past, each time I received a legal notice, my senior colleagues in journalism would tell me that I had received “a badge of honour” and that it was proof that my story had made an impact. Back then, there was at least an outward show of adhering to the law of the country. Journalists could stand by their stories and present facts when they had their day in court. Now, these legal notices have been replaced by a paid troll army. Every morning, a few self-proclaimed intellectuals, columnists and writers identify a few anti-government articles and pick on them systematically. All of them have a colossal number of followers, sometimes running into several thousand. These followers then abuse and troll writers who have taken on the establishment by writing about their wrong-doings.

If it is a woman, the task of online trolls becomes even easier. All they have to do is question her intention, agency, intellect and her character. That way, they not just affect the morale of the writer who then resorts to self-censorship but also promote an abysmal quality of public discourse that relies more on mob justice than intellectual or legal arguments. Any dissent in the social space is reduced to binaries and juvenile name-calling. In this space, all progressive, secular liberals are either “anti-national” or “Commie Naxals” and all those with right-wing political leanings are “Sanghis” or “bhakts”.

There is an increasing attrition of independent spaces that are devoid of these tags and baggage that allow people from diverse political and intellectual leanings to brainstorm, ideate, report, argue and debate. And ‘democratic’ governments are most happy with this development.

In March 2016, a team from the Editors Guild of India visited Jagdalpur in Bastar and Raipur in Chhattisgarh’s conflict zones. They reported that “there is pressure from the state administration, especially the police, on journalists to write what they want or not to publish reports that the administration sees as hostile. There is pressure from Maoists as well on the journalists working in the area. There is a general perception that every single journalist is under the government scanner and all their activities are under surveillance”. Similarly, a number of journalists in Kashmir have been attacked by security forces while reporting on the human rights abuses in the state.

According to a 2016 report by the Committee to Protect Journalists, since 1992, 27 Indian journalists have been murdered and there has only been one conviction in the last 10 years. Most of these journalists are from small towns, often working on contracts, on a project-to-project basis. Mainstream media often commission these stories without legal contracts that outline terms like wages, accident or life insurance cover, or even the basic legal backing. This makes these independent journalists all the more vulnerable. The absence of strong media-centric bodies, unions and institutional support means that, even in the best of times, there isn’t much institutional support when it comes to upholding causes like the freedom of expression. This is especially worrying when the corporate-political nexus can determine news content and often does, by ‘killing’ stories or verbally intimidating reporters or physically harming them, sometimes fatally.

The question of freedom of expression applies to more than just extreme cases like mine, with respect to the ‘Operation Babylift’ story. It is also about how higher-ups in established media houses, under pressure from the corporate-driven advertising compulsions and steeped in upper-class privilege, manipulate the news the public hears, reads or sees.

The same television news channels that covered the anti-rape movement and long half an hours on self defence classes for urban women found no space to debate or report the mass rapes amidst the Muzaffarnagar riots in Uttar Pradesh in September 2013, when over a hundred women were raped but only seven women mustered the courage to fight it out in court. These women, all of them lower-caste Muslims, landless and from working class backgrounds, registered cases against their rapists while living in the same vicinity as them. These women could not generate enough support and attention of the mainstream media because of their class and caste background. They are not articulate, they cannot speak in English, the crimes against them are communal and political in nature and that is why an editor told me “they do not make for good TV”. When news content is meant to clearly cater to the urban upper and middle-class audience, it leaves no space to question prejudices of class, caste, and gender.

A 2013 report by The Hoot suggests there are only 21 identified, registered Dalit journalists in mainstream Indian media. Similarly, tribal journalists often end up working as unidentified stringers, aiding national and international journalists as ‘fixers’ for local stories. There is no cohesive study that looks at the magnitude of the social exclusion that exists within Indian media. Most women journalists are also stuck in the middle and lower rungs of the media hierarchy. Not surprisingly, while on one hand the corporate marketing structure keeps them away from covering grassroots issues, the lack of representation from different sections of society in decision-making positions further desensitises mainstream media to the stories that affect people from the margins.

So at a time like this, I am honoured to receive this award. I would like to thank my family, my friends and colleagues who have supported me. My partner Nakul who has helped me to look at intersectionality of caste, class, gender and religion and the marginalisation that stems from it. The over 1,000 women journalists from Network of Women in Media in India who have provided moral support unconditionally. I would especially like to thank Krishna Prasad, the former Outlook editor, for publishing many of my sensitive stories without batting an eyelid.

I dedicate this award to all the senior women journalists, who have battled for generations so that women my generation can report things beyond flower shows and baby showers and to the unacknowledged journalists who have suffered and survived repression and still told stories that need to be told.