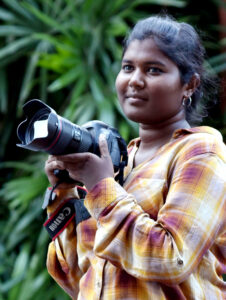 The Network of Women in Media, India (NWMI) is very pleased to announce that photojournalist Akhila Easwaran has been conferred the Fifth NWMI Fellowship (2021).

The Selection Committee was impressed by Akhila’s sensitive work and bold and enthusiastic approach in the precarious world of photojournalism.

Akhila Easwaran hails from Theni, Tamil Nadu. After an education in aeronautical engineering, she switched gears to pursue her passion: journalism. Following a formal education in photojournalism, she worked with some of the major newspapers. Despite the pandemic-era job crunch as media houses opted to rampant downsizing, she has persisted with her dream of becoming a documentary photojournalist and is reluctant to take up lucrative offers in fashion and wedding photography.

Akhila has documented the lives of women and children living under the bridges of Mumbai, transgender artists and migrant workers during the lockdown. She has won the “Women Photojournalist Homai Vyarwalla Award 2020” instituted by the State Photojournalist Association of Andhra Pradesh for her news coverage on Role of Women and children in Anti-CAA protest. Akhila is now embarking on a visual documentation project that will capture the problems faced by fisherfolk in Tamil Nadu due to various government policies, evictions and natural disasters.

“Being woman and becoming a photojournalist has pushed me through heights. Passion for photojournalism along with compassion became my motto.,” says Akhila. Please visit www.photojournalistak.com to see Akhila’s work.

The Selection Committee had the difficult task of selecting from a range of outstanding applications, a majority from Kashmir, and others from Assam, Delhi, Madhya Pradesh, Maharashtra, Odisha, Rajasthan and Uttar Pradesh and West Bengal.

The Committee would also like to commend the following applicants:

The works of these tenacious women journalists will be showcased on the NWMI website in the coming weeks.

The NWMI Fellowship, raised through voluntary contributions from members, consists of a modest annual stipend of Rs. 72,000, as well as professional equipment, if required. The Fellowship also ensures that the recipient becomes part of a nurturing and supportive community of media professionals. Mentoring, including help in the form of contacts with media houses and editors, guidance in pitching story ideas, and sharing of other professional skills, as desired/needed, is an important part of the solidarity and support extended by the network.