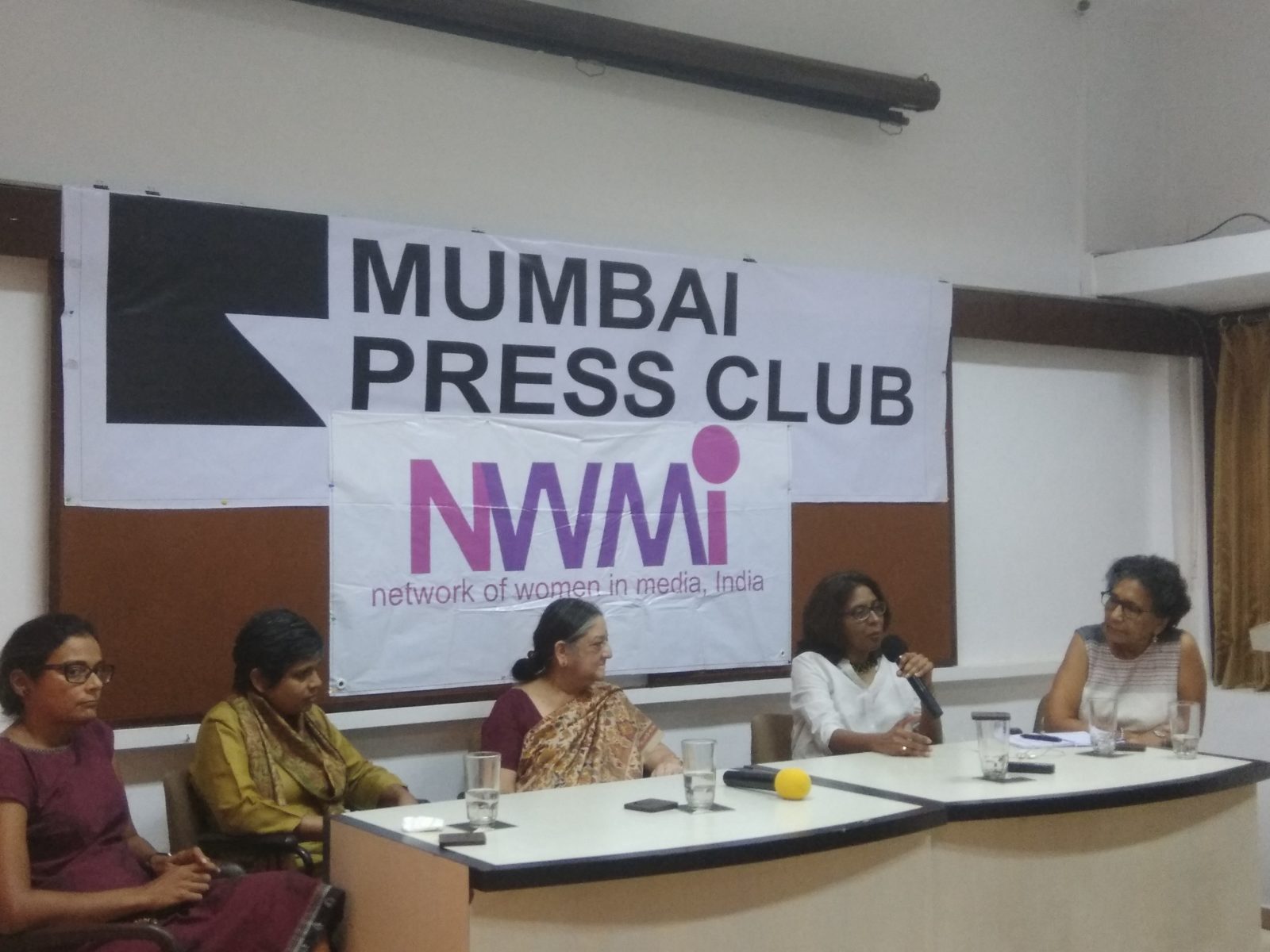 The discussion took stock of the widespread allegations of sexual harassment at the workplace in the media and how to take forward the movement beyond social media.

Journalist and columnist Kalpana Sharma noted that #MeToo is not going to stop. “The principal message is that women have held their peace for far too long. The survivors have found strength and solidarity in numbers. A ripple effect has been created. Women are demanding that they be treated as equals.”

“Every incremental gain that women journalists have made is through a fight, and not due to any largesse. Women fought to cover politics, sport and finance and work on the late-night shift. Women journalists had to work much harder to prove their worth. On the issue of equal pay, because of individually negotiated contracts, we do not even know if women with similar training and experience as male journalists receive similar pay,” she said.

According to Sharma, women in the media are demanding a change in the toxic culture prevailing in newsrooms, so that sexual harassment becomes the exception, instead of continuing as a norm. The real legacy of #MeToo would be if the media actually implemented the law on sexual harassment.

Mumbai Press Club president Gurbir Singh noted that harassment that had been hidden has now come out. “#MeToo has created turmoil, disrupted lives and newsrooms. But there is a need for such turmoil and introspection because harassment needs to be called out. Women have faced the brunt far too long for protesting against harassment and have been fired from their jobs for raising complaints.”

“The greatest victory of the journalist movement has been the calling out of serial abusers of women such as Minister of State of External Affairs MJ Akbar,” he said. Singh also mentioned a proposal to set up a legal defence fund to assist women calling out sexual offenders.

Supreme Court and Bombay High Court advocate NS Nappinai identified three threats to #MeToo. First, some women oppose the movement on the grounds that survivors should have immediately taken action against their aggressors. Second, there are claims of the movement being misused for false complaints. Third, there could be a “chilling effect” and workplaces could avoid hiring women because of fear of the movement. “The first argument lacks balance. Misuse does not mean women victims should be deprived of their legal rights. Finally, we have come far enough that the workplace can hardly afford to ignore women,” she said.

With regard to remedies, Nappinai said that there are penalties for violation of anti-sexual harassment laws, though not enough companies have been penalised for violation. She mentioned that there are also provisions within the Indian Penal Code such as Section 354 A, that deals specifically with sexual harassment, and 354 B, which makes stalking, including online stalking, a crime. Sections 376 A and B were also amended in 2013 to take into account sexual assault by people in authority. And all these are cognisable offences. There is also the older Section 509 with regard to “outraging a woman’s modesty” for which the punishment has been enhanced. Furthermore, the 2013 amendment to the Criminal Procedure Code also has a provision now that holds the police liable if they do not take down a complaint of sexual harassment or assault.

“Survivors are gaining catharsis by going public. However, there is a negative fallout if the complaint is not pursued. The complaint has to be taken forward,” she said.

Anagha Sarpotdar, a researcher on sexual harassment at the workplace, pointed out that it was the inadequacy of the 1997 Vishakha Guidelines that had led to a great deal of advocacy. This culminated in the Prevention of Sexual Harassment at the Workplace Act, 2013. Yet, she said, there were several shortcomings in the law that needed to be rectified. She also noted that this was an entirely employer-driven law, in that the law lays down what employers must do to protect employees from sexual harassment.

Advocate and director of Majlis, Audrey D’mello pointed out that even though companies set up the IC, employees were unaware of their existence and did not even know the names of the members. Members of the committee, including women representatives, are not necessarily sympathetic to survivors and are often selectively chosen in a manner that favours the company. There is also the expectation of the ideal victim, i.e., how a victim should react, look and behave. She cited the Tarun Tejpal rape case as an example of how despite laws being in place, justice can be subverted.

The second part of the discussion moved to looking at the newsroom culture and what needed to be done to change it. The panel included Mumbai Mirror editor-in-chief Meenal Baghel, The Sunday Observer’s former resident editor, Anjali Mathur, Economic Times Panache editor, Saira Menezes and desk head at Economic Times, Malika Rodrigues. The discussants noted that individual newsroom heads and managers should look out for employees instead of leaving it to the HR (Human Relations) department. Baghel said that because of the #MeToo campaign, newsrooms were in a “huge state of flux”. She said that those who headed newsrooms needed to be available to listen to their colleagues, and that casual sexism needed to end and not be tolerated. The panel emphasised that sexual harassment had to be dealt by the newsroom collectively and not be treated as an issue of the HR department alone.

The meeting generated considerable discussion and questions, including from male journalists who were present. In conclusion, the organisers hoped that this would be the first of several such exchanges on how the media deals with sexual harassment.

NWMI has taken the lead in issuing statements of solidarity with survivors and calling out perpetrators. It has published a list of action points for media organisations to tackle sexual harassment. These actions points are available in English, Malayalam, Gujarati, Bengali, Hindi, Marathi, Tamil and Telugu.

Where was #MeToo three decades ago?