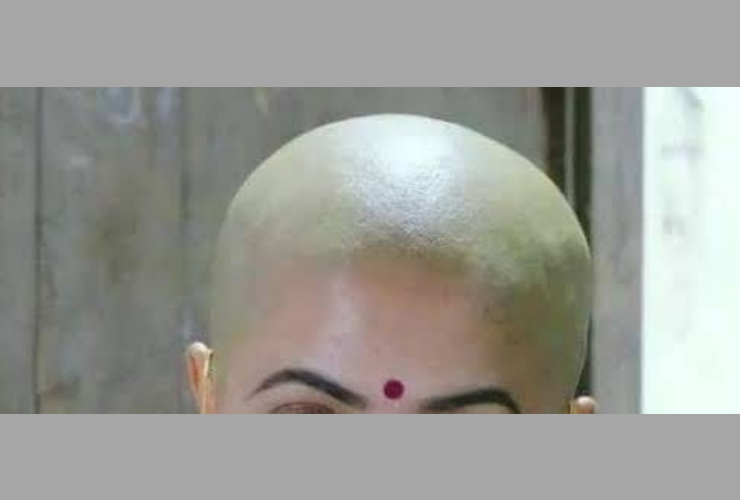 Political parties are in a never-before tailspin in Kerala, flurrying to re-tailor the “women component” in their lists of candidates for the 2021 Assembly elections.

The trigger? The State Mahila Congress President, Lathika Subhash, had delivered a jaw-dropper to live TV news audiences on March 14, with a protest tonsure of her head in the front yard of Indira Bhavan, the state headquarters of the Congress party.

Kerala is getting ready to go to the polls on April 6 to elect 140 MLAs to the 15th State Legislative Assembly. Vote counting in the state will take place on May 2, along with West Bengal, Assam, Tamil Nadu and Puducherry.

Ironically, the Lathika Subhash shock-wave notched its first ripple in the candidate list of her parent party’s rival, the Bharatiya Janata Party (BJP), rather than in her own party. While the state unit of the Congress was still mulling over whether or not to sack the Mahila Congress President who had resigned from the party the day after her dramatic protest, the BJP asked its state President to bury his long-standing hatchet with senior leader Shobha Surendran and to feature her in the frontlines with a key seat in Kazhakootam. Till recently Shobha, a BJP National Executive Committee member, had been conspicuously absent from the party’s 2021 candidates list.

The Congress has been hemming and hawing over decisions about its seven remaining seats but one or two female candidates were expected to be added, possibly in deference to the changing gender credo. As part of its damage control efforts, the party has now added another woman candidate to its list: a student worker, Veena Nair, will be standing from Vattiyoorkavu. They have also decided to support KK Rema of the Revolutionary Marxist Party (RMP) and an independent candidate who will be standing from Dharmadam (Pinarayi Vijayan’s constituency), bringing both under the UDF umbrella.

The latter is the mother of two minor Dalit sisters who were sexually assaulted and murdered in Walayar in 2017. Two weeks ago she had tonsured her head, demanding justice for her daughters. Media reports have so far not disclosed her name (no doubt because of legal restrictions on details that can lead to the identification of rape survivors) but it will obviously be revealed once her nomination is filed and Bhagyavathy herself has already gone public in posters and on social media.

The tonsure bombshell erupted on the unsuspecting Congress party on Sunday afternoon, immediately after the Kerala Pradesh Congress Committee (KPCC) chief, Mullappaly Ramachandran, announced the party’s near-complete candidate list for the state Assembly polls with great élan. The list sported just 10 women across the 92 seats that the Congress is contesting. With the addition of Veena Nair two days later, the total is now 11 women.

The number of female candidates fielded by the Communist Party of India (Marxist), aka CPI(M), which leads the ruling Left Democratic Front (LDF), is not particularly impressive either. For all the gender consciousness that the CPI(M) projects, the party has only 12 women among its 85 nominees.

After the male-heavy candidates lists of the CPI(M) and the CPI were made public, Streekootayma – a Thiruvananthapuram-based, loose-knit platform of women from assorted fields – had floated a parallel list of 150 possible candidates, mainly to counter the common argument that it is difficult to find suitable women to field. This list of potential female leaders comprised women from several parties belonging to both major political fronts, as well as others with commendable track records in their own areas of work but no formal affiliation to any party. The group suggested that the list could grow through more nominations from others who care about balanced gender representation in governance.

There was hardly any illusion that the party bosses would dip into Sreekootayma’s proposed talent pool, but the list did generate some debate in the public domain about the invisibility of women in the polls. In fact, CPI, which had initially nominated only one woman, added one more, evidently as an afterthought.

Another minor miracle was that Muslim League, for the first time in the last 25 years, decided to field a female candidate, albeit just one woman out of the 27 seats the party is contesting.

The Congress tonsure episode did give the estranged BJP leader Shobha a bargaining chip with which to enter her party’s candidates list and she has been swift to seize the opportunity to grab what the party has earmarked as an “A plus constituency”. Even so, the BJP’s female candidate tally is yet to go above 15 out of the 115 seats it is contesting.

Despite Kerala’s crown jewel in terms of the country’s top human development indices (HDI), the representation of women in the state Assembly has never been anywhere near in tune with its positive sex ratio (1084 females:1000 males according to the Census of India 2011), which is different from the unnaturally skewed ratio in most other states. Women outnumber men by 8.27 lakh in the state’s electoral rolls. By the latest estimates, the number of women among the 420-odd candidates that the three major fronts are fielding adds up to 39. This is barely 9% of the total candidate strength.

Lathika Subhash’s outburst marks a red letter moment in the recent renaissance of gender awareness. It has drawn national media attention to the patriarchal underbelly of the process of choosing candidates – even in a state like Kerala that walks tall in the global hall of fame for its female literacy and other such human development scores. “It is the Kerala model of development, much lauded by even Nobel laureates, that stands tonsured in the public glare after this expose,” says KP Kannan, eminent development economist.

The point is not “What’s in a hair-cut or so?” as some Congress leaders ask, trying to shrug it aside. The act of tonsure has obviously shaken the morale of many a woman field worker in the Congress party. Following the 50% reservation for women in local bodies, women in Kerala have even been getting elected to panchayat institutions even from non-reserved constituencies. In such institutions of local self-government, women now comprise over 54% of the total number of elected representatives. While this has made men in politics more insecure, women are more ready than even before to take on new responsibilities.

As for Lathika herself, she has set out to contest in her home constituency, Ettumanoor, as an independent candidate, standing against a candidate of the Kerala Congress (J), an ally of the Congress. For this 56-year old, the last straw that broke the camel’s back was that while recommendations made by the student, youth and various trade union wings of the Congress made it to the candidates list, the Mahila Congress list, seeking at least one woman per district, was ignored.

According to Lathika, even a party member young enough to be her son made an easy entry to the Assembly, while she and other women like her were still made to run around the length and breadth of the state to do election chores for “the boys”. Her point has struck an emotional chord with her counterparts in other parties, too, and the spirit of her protest became contagious. Even women in Left parties have dropped their customary tight-lipped party discipline to question the patriarchy within political parties when it comes to dealing out winnable seats. “In fact, women should get at least 50% seats,” says KK Shylaja, Kerala’s Health Minister and a CPI(M) candidate in the current election fray. “The Left Front, too, should have fielded more women,” she says self-reflexively.

Given its phenomenally effective articulation of what is otherwise a statistical reflection of gender inequality, the emotive visual of a woman leader having her head shaved in protest has made political party bosses sit up ramrod straight and look sheepishly exposed. For champions of equality, this would have been an opportune moment to negotiate a better deal in terms of seats for women. But, sadly, the candidates lists of all parties for the upcoming Assembly elections are already almost wrapped up. The shout-out came too late in the day.

At the same time, there are meaningful gleanings to be gathered for future reference. The emotional episode yields lessons about timely assertiveness and strategies to women politicians. And, perhaps more significantly, it cannot but have indicated to even the more immature of male party bosses that their joyride is finally over.

Note: This post was uploaded on 17 March 2021. The situation remains fluid. A few details may change down the line and updates will be added here. However, the under-representation of women among electoral candidates is, unfortunately, likely to persist until political parties – in Kerala and elsewhere in India – recognise that diversity is critical to democracy.

While coordinated social media campaigns against political candidates are now par for the course, particularly vicious ones target women candidates.  Two of the women mentioned in the post above are already the target of what this news snippet from the print edition of The Hindu sardonically calls, ‘faceless fake profile holders.’

The Congress has now decided to field C. Raghunath against Pinarayi Vijayan in Dharmadam instead of supporting Bhagyavathy. This effectively means that their already small tally of female candidates is down by at least one as of 19 March 2021.

Photographs of the LDF & UDF Manifesto releases in Kerala on 20 March 2021. Please note: not a single woman for dais & shine, only to vote & be damned. Incidentally, women outnumber men in Kerala electorate.