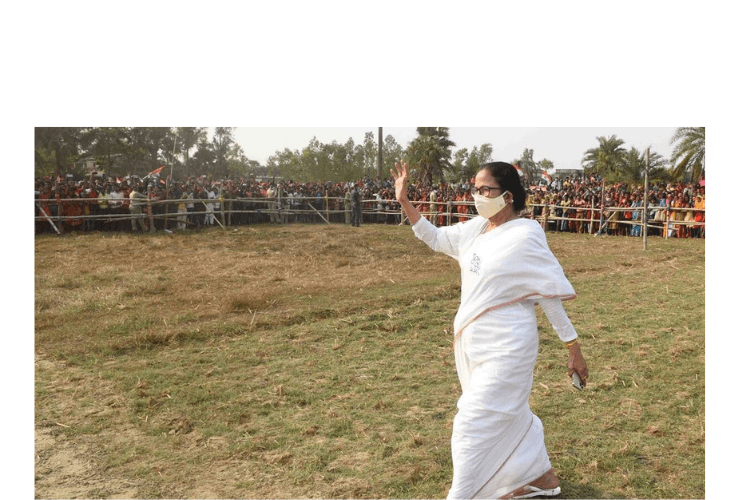 Every five years, the Assembly elections in West Bengal (WB) turn very critical. This year it is all the more so due to the fact that communal politics, which Bengal has never seen nor accepted – despite the experience of Partition based on religious identity – is giving the incumbent All India Trinamool Congress (AITC), or simply TMC, a run for its power.

Divisive politics, represented by the Bharatiya Janata Party (BJP), which is in power at the national level, is gradually spreading its tentacles in the state, especially in the border areas that WB shares with Bangladesh. In WB today the politics is over Lord Ram, in the name of development, and not Ma, Mati, Manush (Mother, Motherland and People – a political slogan coined by Mamata Banerjee, TMC chief and current Chief Minister of the state during the previous Assembly elections).

Not given to frequent changes, WB has been a bastion for Left parties; the Left Front was in power for 35 years before Ms Banerjee, the fiery woman leader of TMC (who was earlier with the Indian National Congress), wrested it away in the name of parivartan (change).

The 2021 state elections for the 294 seats of the West Bengal Legislative Assembly are scheduled to be held between March 27 and April 29 in an eight-phase exercise. In 2011 the elections were conducted in six phases.

Since Ms Banerjee is the first woman chief minister of the state, women’s rights groups, and women in general, both in the state and across the country, have a special interest in her career and destiny. So far Ms Banerjee she has been credited with having done constructive work, setting a good example of hard work and dedication. However, political violence and corruption are two long-standing problems the state has unable to get rid of – even during the decades when the Left Front was in charge.

Female voters are taken very seriously today. With women amounting to 49 per cent of voters in WB, Ms Banerjee has announced several welfare schemes for them from time to time. The latest is the Maa scheme, whereby a meal of rice and egg is available for just Rs 5.

TMC has been reaching out to the female electorate through a number of policies aimed at the girl child and women for over a decade now. The most popular is Kanyashree (cash for girls between 13 and 18 years)to prevent child marriage and school drop-outs. Another scheme, called Rupashree, provides a grant of Rs 25,000 for economically stressed families at the time of their adult daughters’ weddings.

Her party was the first to release the full list of candidates for the upcoming assembly polls for 291 seats on March 5, with an emphasis on youths, minorities, women and socially/economically backward communities.

The BJP has so far announced their list for seven phases, fielding candidates for 280 seats. Among these about 15 are women (approximately 5 percent).

Thanks to the multiple phase elections, the final lists of candidates of several parties, including those involved in seat-sharing arrangements, are still works in progress. The BJP, the Congress and the Communist Party of India (Marxist), aka CPM, are all releasing their respective lists of those who are being given tickets for various seats in phases.

After facing criticism that it was a party of old men, the CPI(M) has unveiled a list of poll candidates, pointing out more than half are less than 40 years of age. Among them are student leader Aishe Ghosh (president of the Jawaharlal Nehru University Student UNION or JNUSU) and Minakshi Mukherjee, president of the party’s youth wing. The latter will stand against Mamata Banerjee and Suvendu Adhikari in the high profile Nandigram constituency. Speculations was rife that the Congress and the CPI(M) will leave the seat for their alliance partner, the Abbas Siddiqui-led Indian Secular Front, since the constituency has a significant number of minority voters. But now the seat has evidently gone to the CPM.

For now both WB and the rest of the country are waiting with bated breath to witness the fierce battle between divisive and inclusive politics being played out in the state. All eyes are especially on Nandigram, which changed politics in WB forever 14 years ago. Nandigram was the scene of a historic land rights struggle, with villagers and farmers protesting against the then Left Front government’s bid to acquire 10,000 acres of land for a chemical hub and a special economic zone.

Mamata Banerjee was sworn in as chief minister of the state on 20 May 2011. One of her first decisions was to return the 400 acres of land taken from farmers in Singur and given to Tata Motors for its Nano (small vehicle) project. This time it is not Singur but Nandigram that is the cynosure of all eyes. The rest of the country, too, is watching closely as Ms Banerjee takes on her former aide, Suvendu Adhikari, in a high-pitched battle.

Although the fight is between two former party colleagues turned rivals in Nandigram, with Mamata Banerjee there is never a dull moment. There was drama over her injured foot, which she initially claimed was brought about through a “conspiracy” by the Opposition. However, that controversy has died down now that the campaign is in full swing. She appears to have reconciled to the fact that the incident that caused her injury was an accident and not deliberate. However, she continues to campaign on a wheelchair as the TMC slogan, “Bangla nijermeyekechaiye” (Bengal wants her own daughter) gets louder by the day.

There is no denying the fact that it is never easy to be a woman politician – anywhere in the world – no matter how noble your intentions may be.

A comprehensive report in Article 14 by Gilles Verniers & Maya Mirchandani analyses the history of women’s representation in politics in West Bengal, with data, suggesting that “while the Trinamool Congress sails ahead of its opponents on fielding women candidates, the relatively higher numbers of women in Bengal politics is part of a longer trend of gradual inclusion, to which more than one party has contributed.”