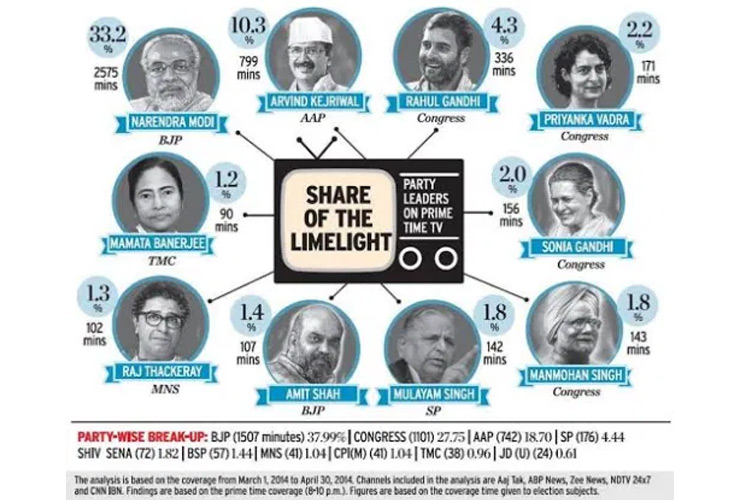 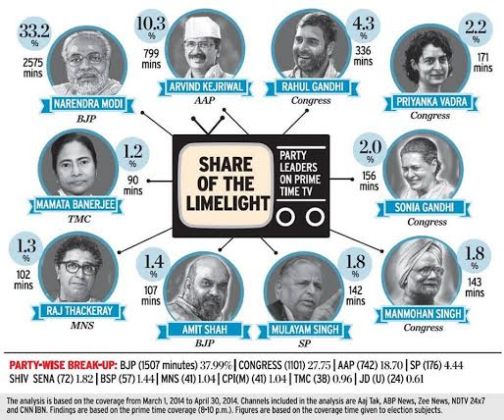 The provenance of the graphic posted here is unknown at the moment (it
was shared on Facebook and online searches haven’t yet revealed where
it originated).  However, it obviously illustrates the latest findings
of researchers at the CMS Media Lab who have been tracking who among
prominent political leaders got what share of prime time on news
television.  If, as
they say, a picture is worth a thousand words, this visual sure tells
a vivid story.  The three women who actually made it to the top of the
pops together accounted for only 5.4 per cent of the time given to
political party leaders on prime time television news.  Yet that story
didn’t make it into a report in The Hindu by Rukmini S. highlighting
the figures released by the CMS Media Lab:  “Modi got most prime-time
coverage: study“.

Interestingly, findings released by the same organisation in mid-April
found that “Arvind Kejriwal bests rivals in TV news coverage“.
Then, too, women political leaders had a marginal presence on prime
time news:  only two, Mamata Banerjee and Shazia Ilmi, figured among
the top ten a week into the elections.  But this fact was not noted in
coverage of the research data.

Not in our names!