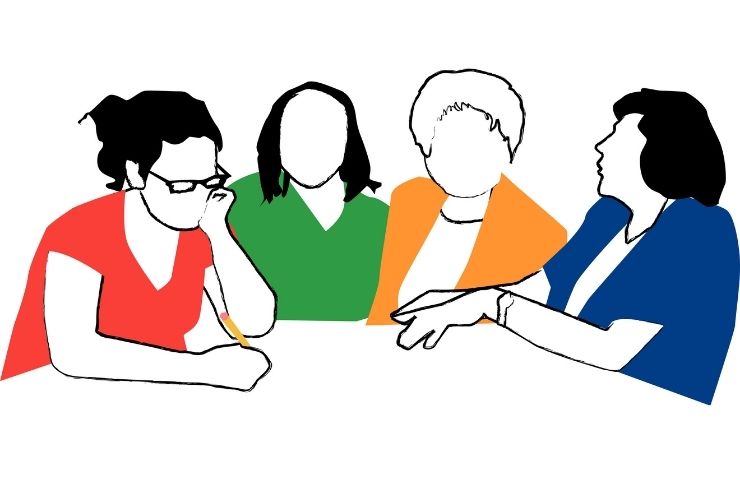 The oral history project, ‘The Moment, As She Knows It’, helmed by community organiser Gather Sisters, pieces together stories of Covid-19 as seen through the eyes of women journalists across India, several of them NWMI members.

The project, conducted over video conference, has already covered 16 States/Union Territories and aims to cover a total of 30 over a period of six weeks. The online sessions usually open with an introduction to the State/UT by the guest journalist, which includes history, culture and politics. This is followed by her comments on responses to the pandemic by the State and other actors. The journalist then answers questions from participants which generally cover a wide array of topics.

The idea for the project came from the need to make sense of the pandemic, as well as the disenchantment with mainstream news, says Tithiya Sharma, the woman behind Gather Sisters. “How do you shatter the sound barrier of disinformation?” she asks. There is an information overload but finding news sources which can be trusted is difficult, especially during this pandemic, she says. Sharma refers to a New Yorker cartoon which posed the question, ‘If this is the Information Age, how come nobody knows anything?’

“Through this series, we are creating a new way to consume current affairs and news, which comes from a highly trustworthy source and is told in a deeply personal way and in an extremely engaged environment,” says Sharma. The sessions provide a framework that helps participants make sense of the politics of a place, like putting together ‘pieces of a puzzle’, she adds.

Regular participant Nimita agrees. “At present we have all the facilities and access to news at our fingertips. Yet we don’t know the ground realities of our country, whether due to these not being reported or because what is reported is highly edited. The series has got together courageous and hardworking reporters who are facing challenges at every step.”

The featured journalists, long term residents of the locales they report from, are deeply embedded with the places they introduce to participants, having survived patriarchy and the pandemic to tell the stories, explains Sharma. These are women journalists who are committed and have integrity, says Sharma, women ‘I want to believe’. According to her, finding these speakers has been a process of discovery, especially since the project is keen to highlight lesser-known voices.

Independent journalist, author and NWMI member Sameera Khan says, “As a listener, I have been tremendously moved by the testimonies I have heard from some very courageous women journalists who have shared interesting information, stories and perspectives of reporting on the COVID-19 pandemic in personally and professionally trying times. I think it is a fabulous idea to have each journalist give us a perspective from a particular state and really fill in the big gaps in our knowledge. This makes for an incredible archive of women journalists’ voices.”

Sharma points out that it is also not a one-way information transfer. Participants usually have multiple questions and seem to want to linger. Women listeners often share their opinions and experiences real time on chat during these gatherings, she says. Women from across the country and even the diaspora, ranging in age from the 20s to the 70s, have tuned in. Discussions revolve around a shared feminist and political sensibility. For these reasons and to maintain a safe space, the gatherings are open only to those who identify as women. According to her, the speakers, too, have loved the idea, saying it gives them a chance to think aloud and talk about their own thoughts and fears about reporting during the pandemic. Citing examples of other online initiatives which have been infiltrated and ruined, Sharma admits it is a difficult job to avoid such intrusions.

Besides various aspects of the pandemic, topics discussed during the sessions have included gender bias, historical inequities, the healthcare system, the processing of individual and collective grief, women’s collectives and solidarity.

Journalist and NWMI member Jyoti Punwani says, “I tuned in to the Gather Sisters’ series because, as a journalist, I’ve felt sad that I’ve not ventured out to cover this historic time owing to my worry about getting Covid, given that I’m 66. Secondly, as an Express reader, I have appreciated many of Tabassum Banagarwala’s reports – so I was particularly interested in her experiences of reporting during the pandemic. She was featured in the second episode, and I got hooked after listening to her. Since then, I’ve tuned into all episodes and discovered a world where many young journalists have risked their lives every day merely by reporting. Also, going beyond their professional duties, many of them have saved lives by using their contacts to help desperate families looking for medical care. It has left me wondering whether I could have done the same had I been their age.”

Sharma hopes to publish the edited videos soon after completing all the sessions and keep them as a record of what happened during this pandemic in India.

“The series has provided insights into the profession and professionals that are hardly talked about, journalists whose struggles are rarely highlighted. The sessions have helped us dive into issues like mental health, gender bias and politics at the workplace and on the field, reforms seen and suggested, as well as each state’s dynamics in the context of the rest of the country. The speakers have valuable inputs about people dealing with issues at each level of the bureaucracy, they provide hard hitting insights into the sorry state of the marginalised and the inaction of the State and, at the same time, they have been reassuring by showing us that humanity exists,” says Nimita.

The oral history project is one of many such gatherings that Sharma hopes to organise through Gather Sisters in the months ahead. According to her, the pandemic has provided an opportunity to galvanise a feminist constituency in the country. Urban Indian women have never had ‘more at stake or more to lose’ than they do right now, she feels.
Gather Sisters was born out of a ‘big vacuum’, where ‘a throbbing, feminist, community life’ should exist for urban women, says Sharma. With the pandemic, Gather Sisters has shifted its community-building focus online. The constantly evolving feminist community aims to provide a space for urban women, offering them a chance to break out of ‘homogenous social circles’ which are governed by factors of caste, religion and class, she says. “The kind of community life that can become real world interactions and collaborations and job opportunities and friendships and creative endeavours.”

My Lockdown Diary with Migrants