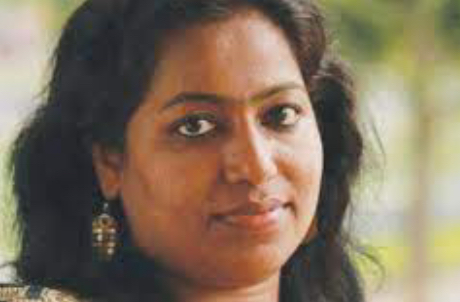 The Media Foundation has chosen Shahina KK as the winner of the Chameli Devi Award for an outstanding woman journalist. In her acceptance speech she spoke of her attempt to establish that the police conspired to forge a case against Abdul Madani after the Bangalore blasts. “I have always tried to espouse the cause of those who live on the margin and who cannot have their say,’’ she said.

She was awarded for work done while with Tehelka. She is now with Open magazine.

I am using this opportunity to explain who I am.

See, I happen to be a Muslim, but I am not a terrorist.

Unfortunately, anybody carrying a Muslim name, no matter whether he or she is a believer, agnostic or atheist has to keep this as an opening line on every occasion of a dialogue in public. I have hardly practiced any religion right from my adolescence yet I have to make this kind of a statement.

You may have an idea about what I am going to talk about. In fact this award gives me a great opportunity today to talk about the crime I have committed. I interviewed two of the prosecution witnesses in the infamous Bangalore blast case in which Kerala PDP leader Abdul Nasar Madani is an accused. Madani had spent 10 years in prison as an under-trail in the Coimbatore blast case of 1997 and later was exonerated in 2007. The firebrand orator, who once triggered some kind of belligerence among the post-Babri Masjid Kerala Muslim youth, in his second coming had made a public alliance with the left parties in the last Lok Sabha polls. A man who was speaking the language of democracy, a politician who was using the tools of parliamentary politics had been again taken by the police, this time from Karnataka, for his alleged involvement in the Bangalore blast case. He was arrested immediately after the Lok Sabha polls.

Two of the six prosecution witnesses in the case, Jose Thomas and Mohammed Jamal who is the younger brother of Madani, had approached the court alleging that their testimonies had been fabricated. The third witness was on death bed in a hospital in Ernakulam on the day the police recorded his testimony. He died four days later. Police records say that the testimony was recorded in Kannur, around 500 kms away from Ernakulam where he was admitted. The hospital records prove that on that day he was not in Kannur, but was very much in the hospital in Ernakulam. Speech continues here.