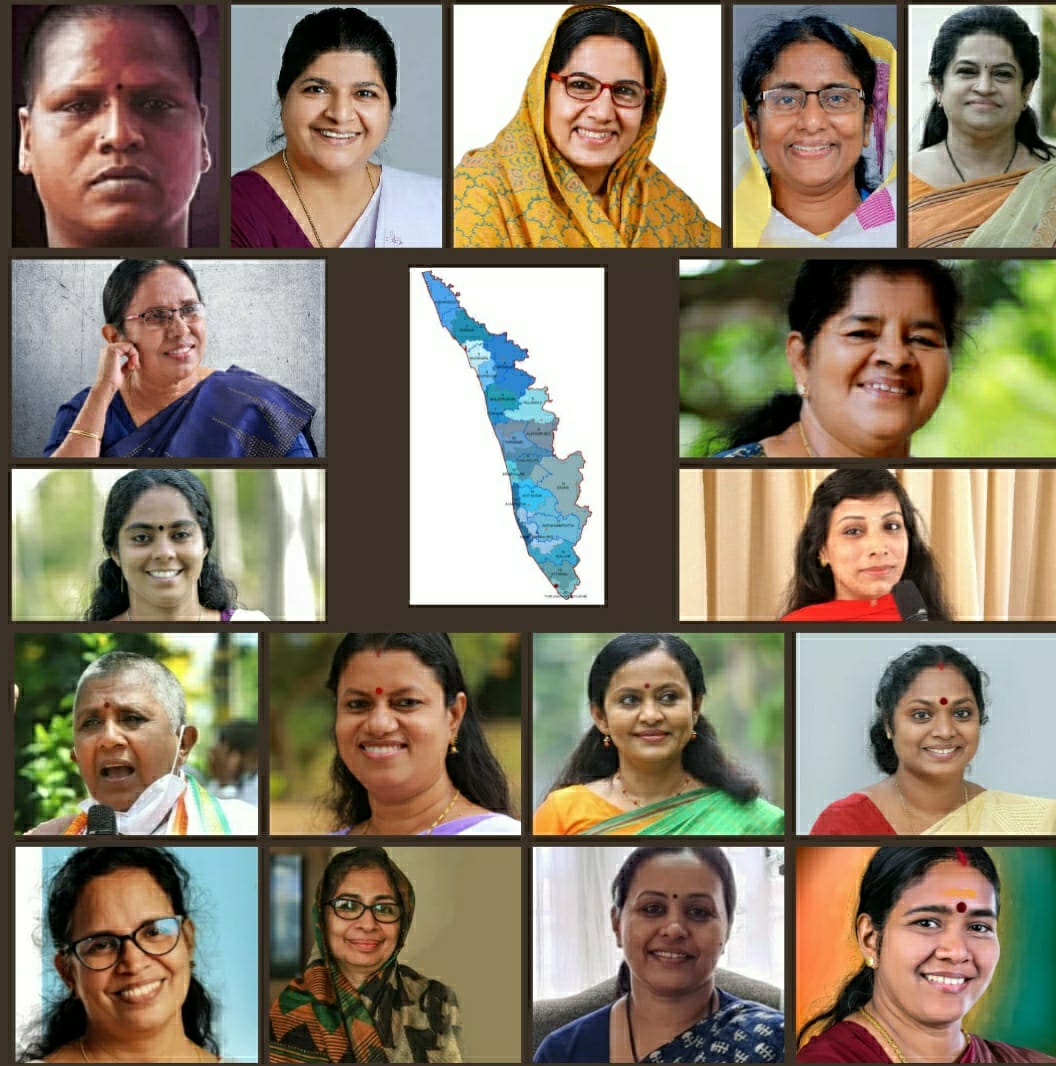 Kerala is one of the five states going to the polls today. This time too Kerala’s political partieshave displayed a very poor record of fielding women candidates, despite public revolts from women politicians (read more here) when the lists were first announced. Following some very fast shuffling from the parties Kerala parties produced a mere 40 women candidates contesting today, just 9% of the total 420 candidates. Meet some of these candidates. 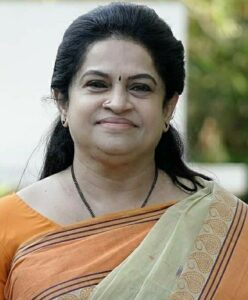 Contesting from what was once a Congress stronghold, 60–year–old Padmaja Venugopal, daughter of late Congress veteran leader K Karunakaran, is seeking to reclaim the Thrissur seat. Recently appointed as Vice-President of the Congress party in Kerala, Venugopal has seen mixed success in electoral politics.  Th time round she is facing off wi P Balachandran, the Communist Party of India (CPI) candidate, and actor and Rajya Sabha MP Suresh Gopi, fielded by the Bharatiya Janata Party (BJP). A familiar face in  Thrissur district, Venugopal is hoping to focus on the United Democratic Front’s mantra of development to defeat what the Congress calls its opponents’ politics of violence and communalism. After her loss during her electoral debut in 2004, she stayed away from electoral politics even as her elder brother, Muraleedharan, swiftly moved to become Congress state President and has had multiple terms as a Member of the Legislative Assembly (MLA) and Parliament (MP). Venugopal’s slogan, “Along with Thrissur,”goes with her promise to plan a complete makeover of the town, beginning with a women’s only marketplace and  an IT park.  She has also said she would address drinking water problems.

Daleema Jojo,  famous for her playback singing, was  chosen  by the Communist Party of India (Marxist), CPI(M), to run in the Panchayat (Local Self Government) elections in Kerala in 2015. She was elected  Vice President of the Alappuzha District Panchayat Council. In the 2021Assembly elections, she is contesting from the constituency of Aroor. 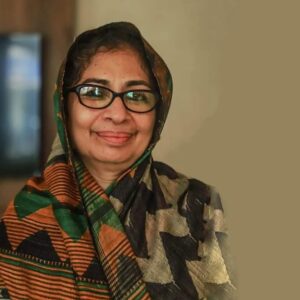 Noorbeena Rasheed is the first woman candidate of the Indian Union Muslim League (IUML) in 25 years. She is credited with being the first Muslim woman to move the Supreme Court against the criminalisation of  triple talaq after the 2019 law came into effect. She is contesting from the Kozhikode South constituency. A former criminal lawyer, she stood for the 1995 municipal corporation election  and worked as a municipal councillor for 10 years. During her time as a municipal councillor she established the Women’s League, the women’s wing of the IUML. Today she is the national general secretary of the Women’s League. She has  also been demanding better representation for women in all party forums and believes that all political parties need to give adequate electoral space for women. Pitted against her in the Kozhikode South constituency is Left Democratic Front’s Ahammed Devarkovil and Navya Haridas of the BJP. Rasheed wishes to work towards providing safety and security for the women in her constituency. 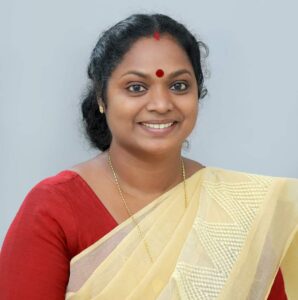 The CPI’s CK Asha is contesting for a second term from the Vaikom constitutency, seen as a CPI bastion.

She stands against Congress’s Dr PR Sona of the Congress party, Ajitha Sabu of the Bharath Dharma Jana Sena (BDJS), a constituent of the National Democratic Alliance (NDA) and independent candidate Kuttan Kattachira. 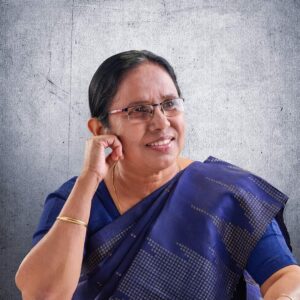 KK Shailaja Teacher has earned the nickname, COVID rockstar, thanks to her work as the Kerala’s Minister for Health and Social Welfare  during the 2020-21 pandemic. She was  honoured by the United Nations, among others, for her efficient handling of the situation. Fondly called Shailaja Teacher, because of her former role as a teacher, she was featured in the Financial Times’ list of most influential women in 2020. Contesting as a CPI(M) candidate from the constituency of Mattannur, the place where she grew up and completed school and college, 65–year–old Shailaja,a.k.a the Cororonavirus slayer, joined politics full time in 2004. She earned fame due to her work during the Nipah Virus outbreak in Kerala in 2018. Owing to her proactive work during the Nipah and  Covid crises, she has become a household name across the country. UDF candidate Illikakal Augusthy, who belongs to the Revolutionary Socialist Party (RSP), is pitted against her. 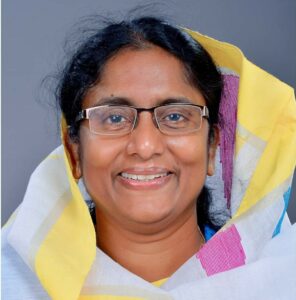 Shanimol Osman, an advocate by profession, is one of the first female leaders from Kerala to become the Secretary of the All India Congress Committee. In the 2019 Lok Sabha elections, she lost to AM Ariff of the CPI, also an advocate. However, in the Assembly 2019 by–election in Aroor she defeated the CPI(M) leader, Manu Pulickal. At a recent meeting of the Congress Political Affairs Committee (PAC), Osman had criticised  party leaders and their style offunctioning and  asked tough questions about what the party leadership had done to keep its vote base intact! She is contesting the Assembly elections from the constituency of Aroor.

Padmaja S Menon is the BJP-NDA candidate contesting from Ernakulam against Shaji George (Independent) and T. J. Vinod (Congress). The former journalist and daughter of union leader SCS Menon, she started her political foray in 2014. Previously  President of the Mahila Morcha,she is currently  State General Secretary of the Bharatiya Janata Mahila Morcha. Menon hasclaimed that her priority will be to address the basic needs of women; she has promised a 24X7 helpline for women. 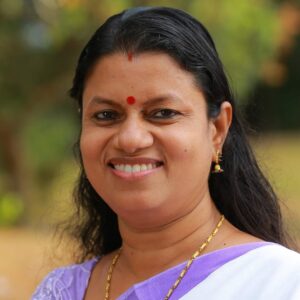 Bindhu Krishna is the UDF candidate from Kollam. A law advocate by qualification, Krishna is the President of the District Congress Committee and enjoys tremendous support from women,especially from the coastal communities who saw to it that Krishna would be the Congress party’s candidate. Krishna joined the Kerala Students Union at the age of 15 and soon became the unit secretary at SN College for Women, Kollam. In 2011, she became the state president of the Mahila Congress.  She was also appointed a national vice-president of the Youth Congress after a talent hunt launched by Rahul Gandhi. 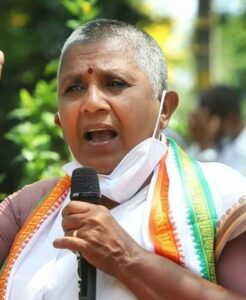 Lathika Subhash, former president of the Kerala Pradesh Mahila Congress, is contesting as an independent candidate from Ettumanur constituency in the upcoming Assembly elections. After being denied a ticket, 56–year–old Subhash, who has four decades of political experience, lodged her protest in a dramatic manner by not only resigning from her post as the state president of the Mahila Congress but also tonsuring her head outside the head office of Kerala Pradesh Congress Committee (KPCC) in Thiruvananthapuram. Subhash also protested against the party’s decision to field only ten women in the current elections. 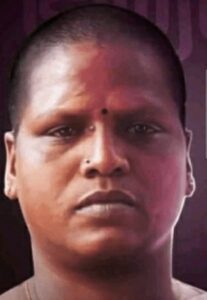 V Bhagyavathi is contesting as an independent candidate from Dharmadom constituency, standing against Kerala Chief Minister Pinarayi Vijayan. She is the mother of the two minor Dalit sisters who were sexually assaulted and murdered in Walayar Town in Palakkad. In 2017, her daughters, aged 13 and 9, were found dead in their house. The autopsy reports revealed that the girls had been sexually assaulted. The “Walayar Mother,” as she is known, has been demanding justice for her daughters and launched a protest against the delay in the process by tonsuring her head in February 2021. She demanded that action to be taken against police officials who had allegedly botched the investigation. She has been on a Neethi Yatra (journey for justice) from Kasaragod to Thiruvanathapuram from 9 March to 4 April, demanding justice and protesting against the government’s inaction over the case. 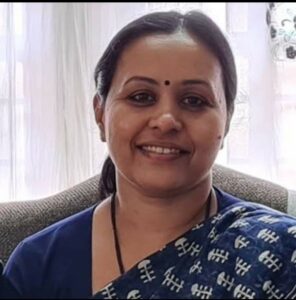 Veena George is the Communist Party of India (Marxist) candidate from Aranmula. A former journalist, George is the current legislator from the constituency and wants to win this time, too, since she believes that the government has worked hard and taken great strides towards change, especially with regard to the construction and renovation of roads and restoration of the VarattarRiver, among other development works. She has promised to continue working to improving the status of the communities who are currently classified as below the poverty line (BPL).

J Mercykutty Amma, of the CPI(M), is presently one of two women ministers in the PinarayiVijayan government. She is also fighting for a second term in Kundara constituency in the ongoing election. A renowned leader, especially among fish, coir and cashew traders in Kollam, 65–year–old Mercykutty was earlier also a leader of the Centre of Trade Unions (CITU). She faces former Congress MLA Vishnunath in her constituency. 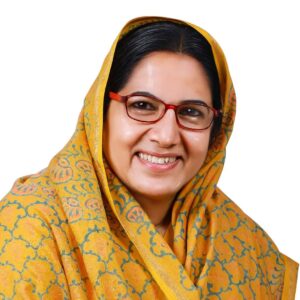 Kanathil  Jameela is the CPI(M) candidate from Koyilandy and the party is banking on her tremendous experience in running local self-government bodies: she  headed the Kozhikode District Panchayat twice.  She has been credited with being responsible for ensuring the successful implementation of the Sneha Sparsham project meant to assist people suffering fromkidney diseases, apart from many other successful development works. Jameela entered  electoral politics during the Thalakulathoor Grama Panchayat polls in 1995 and became GPpresident. 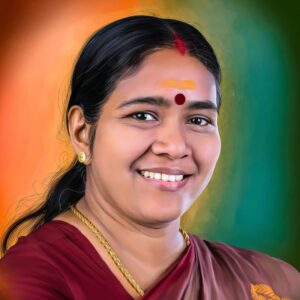 Sobha Surendran is the BJP candidate from Kazhakkootam constituency, Thiruvananthapuram district. The 47-year-old Vice President of the  state unit of the BJP impressed the party’s central leadership by spearheading the protests against the entry of women of all ages to the Sabarimala shrine.She joined the Bharatiya Janata Yuva Morcha when she was 21 and later worked with the party’s Mahila Morcha, becoming its state vice president in 2004. Surendran had expressed solidarity and empathy with  Congress Leader Lathika Subhash and her tonsure protest againstgender bias in politics. 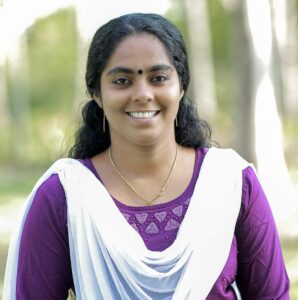 At 26, Aritha Babu, contesting from Kayamkulam, is the youngest Congress candidate. A Commerce graduate  currently pursuing post-graduate studies in social work, Babu entered politics through the Kerala Students’ Union and was elected to the Alappuzha District Panchayatwhen she was 21. She supports her family by selling milk and was recently  at the receiving end of a demeaning remark by AM Ariff, the CPI(M) MP from Alappuzha, who said, “This is not an election to the milk society but for the Kerala Assembly.” 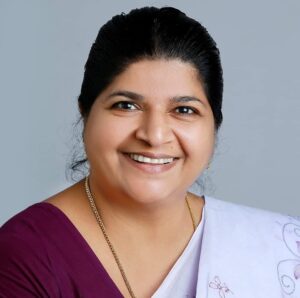 A former District Panchayat member, Russel plans to prioritise working for women’s welfare, and will also work towards ensuring drinking water for local communities, apart from pressing for the completion of the pending hill highway stretch. 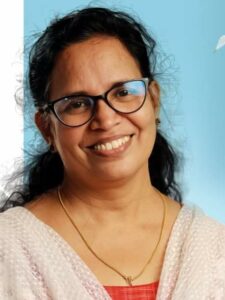 She has often spoken out againstpolitical violence.

Will these candidates change Kerala’s chequered history in the political representation of women? We will know soon.

Varsha Pillai is Associate Director, Communications and Advocacy, Dream A Dream, and a volunteer at Shakti, a public pressure group to increase the political representation of women