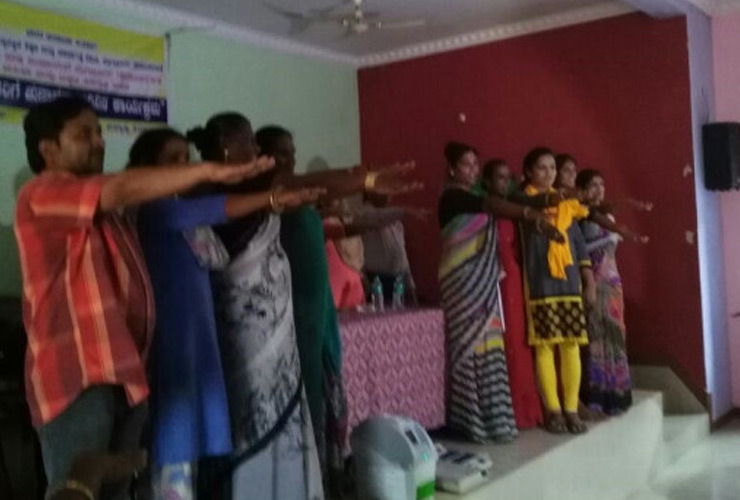 Hitting below the belt with a blitzkrieg of ads

While voter enrolment is the immediate priority of the government, “housing and government jobs, along with the proper implementation of the Karnataka State Transgender (TG) policy, are the priorities for my people,” says Jarmi, programme manager at Samara, a community-led NGO working on TG people’s rights. Nevertheless Samara has taken part in the enrolment drive initiated by the Government of Karnataka (GoK).

Even if the enrolment effort does not result in a significant increase in the number of TG persons added to the voters’ list, the campaign has provided an opportunity for community-led organisations to engage with the government.  This has brought to light a number of issues that need to be taken into account in future efforts by the state to ensure the inclusion of the TG population.

To kick-start the special drive to issue voter identity cards to members of the TG community and sex workers, the Department of Women and Child Development (DCWD) of the GoK held a consultation on 12 March 2018. The meeting was meant to identify stumbling blocks in the enrolment process and to address them so as to find the best way forward. Among the issues raised at the meeting were: lack of voter identity cards (voter IDs), problems with enrolment, as well as embarrassment and discomfort in exercising the right to vote. 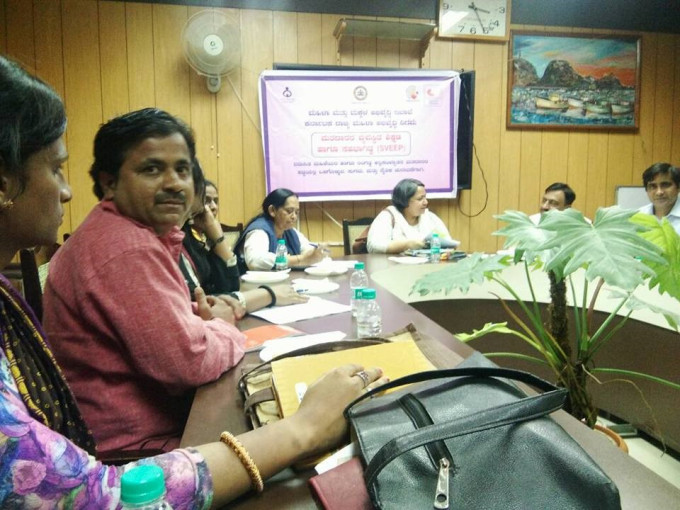 Mallu Kumbar at the government consultation on 12 March 2018

The plan was to prioritise the drive and complete the process within 15 days. According to Mallapa of the Karnataka Sexual Minorities Forum (KSMF), one day campaign meetings have been organised by the government in partnership with local organisations in approximately 15 of the state’s 30 districts – most recently in Nelamangala on 26 April 2018. At these meetings, government representatives highlight the importance of voting as well as of inclusion, encourage the public to participate in the upcoming elections, outline the voting procedure and demonstrate the use of electronic voting machines.  At the end of the programme the participants take a pledge to vote in the upcoming elections. 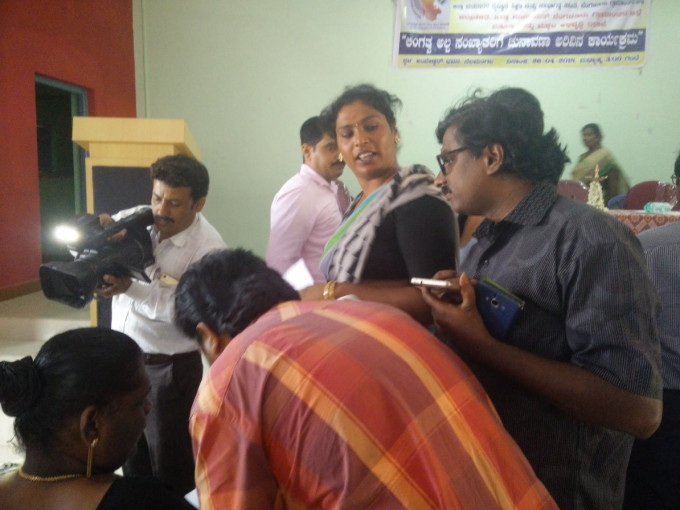 The government has also made efforts to sensitise election officers and have plans for separate booths in some wards with a significant TG population.  While the enrolment process has certainly gathered momentum with the state government taking a firm lead in prioritising it, the entire mobilisation effort was led by community organizations, with very little time or resources in hand.

While filing applications for voter IDs, the biggest difficulty identified by community representatives was in furnishing an acceptable address proof. This is because a significant percentage of TG persons are forced to leave their parental homes early in life. Subsequently they have difficulty in accessing secure housing, let alone finding a permanent address. According to Umesh, director of Jeeva, people are usually not ready to rent houses to TG people. As a result, many of them live in groups of 10 to 12. Individual names are usually not part of the rental agreement or on other bills that are accepted as proof of address. It is a challenge for a person without a home or family support to get an address proof document.

One innovative suggestion that came up during the March meeting was to use as proof of residence a letter or parcel received by post that mentions the name and address of the applicant.  Government representatives also suggested that a letter from a local organisation on an official letterhead, mentioning the address of the applicant, gender of preference and years of residence, could be taken as address proof to support the application. These suggestion are meant to ensure that eligible voters can be enrolled on the basis of reliable alternative documents and that the absence of any of the listed options does not result in exclusion.

The second challenge highlighted during the meeting was name correction. It was suggested that the applicant should follow the legal procedure for name change that works for everyone: prepare and publish an affidavit. The KSMF, which took a lead in this, found that election officers in many districts are not sensitive, nor sensitised to, the issue of gender. As a result, these officials insist on a letter from the local organisation as additional documentation. Many officers refuse to follow the directives of the Government of Karnataka even though they have been communicated to them, arbitrarily insisting on additional documentation. This adds to delay and expense for applicants. Sometimes it also leads to loss of confidence. The supporting nodal agency often has to devote scarce resources to deal with such problems.

At the district level, most officials are not aware of problems faced by the community; nor do they seem to have the training, sensitisation or inclination to provide support. Many of them refuse to follow the alternate options approved at the state consultation. Except for a few sensitive officials, the others in the revenue department demand more proof to complete the documentation, authentication and verification for the allotment of voter IDs.

Case workers at the taluk and panchayat levels, while uploading applicant details, generally send the files to local Anganwadi teachers for address checking. Since these teachers are usually not close to the TG community they are often not able to get the information and tend not to approve the address proof provided. When they go to houses for verification, they are often insensitive and use derogatory words to ask about the applicant’s gender – e.g., ‘chakka’ and ‘ombattu’ (derogatory Kannada words for those assigned the male gender at birth who identify as female). When such questions and words come from an official the experience can lead to a lot of pain for the individual concerned and disturbance in the lives of the immediate family.

If a person is rendered homeless in the process of enrolling as a voter or becomes depressed or even commits suicide as a result of negative attention in the neighbourhood, who will be responsible? In extreme cases the local organisation trying to support TG persons to assert their democratic rights and apply for voter IDs may also lose face with the community. Such process issues can be easily predicted with a little design research. The administration needs to be better equipped to listen to those who can highlight genuine problems and devise suitable strategies to ensure that the necessary verification process is not compromised and, at the same time, that it is sensitive to the reality of an already stigmatised population.

What is clear about the role of the government during the current enrolment drive is that while some officials go out of their way to enable inclusion, they don’t necessarily represent the system. Best practices will need to be institutionalised incrementally but systematically so that the system works for everyone always.  For this the government needs to develop a more robust approach to actively listening and responding to the stakeholders, particularly community representatives. What we need along with sensitisation is a clearly defined and enforceable system.

There tends to be an oversimplification of the ‘transgender’ identity while showcasing inclusion.  The sari-clad transwoman generally represents the community in advertisements issued by both the government and the Election Commission – there is an overt insistence and preference for this particular category of TGs.  About 30 minutes before the scheduled start of the campaign meeting in Nelamangala in March, a number of cis-gender women from local Self  Help Groups (SHGs) filed into the hall. When asked if they were part of the campaign, one of the officials replied, “This programme is for ‘your people’ only, but how can we predict how many will come?” As the programme progressed, as more of ‘my people’ came in, the SHG women were told to move back, while the hijra (‘satla’) women were given the front rows. The stage unfortunately was out of bounds for them.

Pointing this out is not to reduce or belittle the effort towards inclusion made by the government. There is value in creating spaces for excluded sections of the community to interact with others, as increased awareness and familiarity as well as conversations can help build a more inclusive society. Also, it is not fair to single out the government and official bodies for assuming that sari-clad hijras represent the TG community as a whole. The media, too, often prefer to highlight trans women in their reports. It is easier to use a quote from and photograph of a sari-clad trans woman, than to look for and showcase a pant-shirt wearing trans woman or man who may not look very different from anyone else in such regular, routine clothes.

Narrating one of her many experiences with the media, Umesh says, “I often get calls from media persons – referred to me by others – who want to write about our community issues. Recently I received a call regarding the elections and I answered the first set of questions. As the conversation progressed, I was asked if I had a voter identity card and if so what gender is mentioned on the card. When I replied that I did have a card and that my gender is male on the card, there was silence from the other side. I could sense an immediate loss of interest. Since my voice is soft and slightly feminine, it does not give away my appearance in a telephonic conversation. Once I mentioned that I identify as male, it was clear that the interviewer was looking for an excuse to end the conversation, though only after asking me for the contact of another community member – someone who identifies as a woman and is sari-clad.”

Hitting below the belt with a blitzkrieg of ads