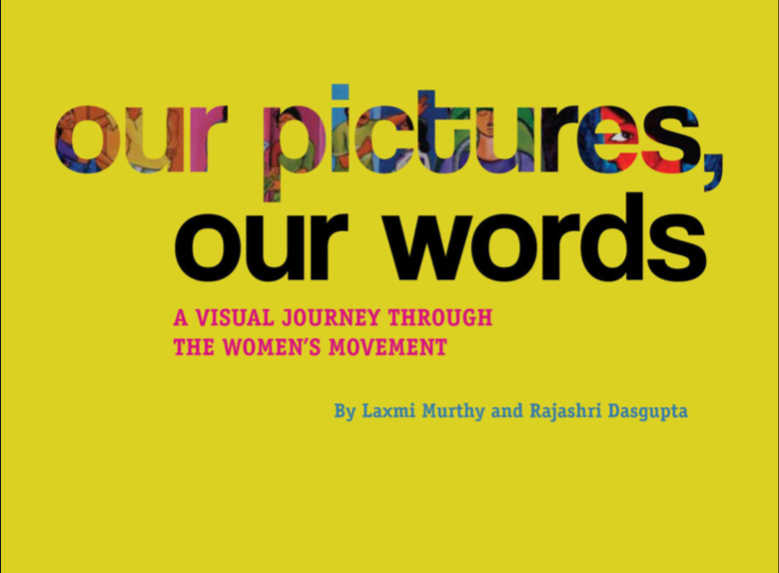 The Bengaluru release of Our Pictures, Our Words: A Visual Journey through the Women’s Movement by Laxmi Murthy and Rajashri Dasgupta (Zubaan, 2011) took place on March 31, 2012, at Jaaga, a non-profit space for programmes such as screenings, workshops, performances and gatherings. The event was co-hosted by the Network of Women in Media, Bangalore along with Zubaan and Jaaga.

The proceedings began with an audio-visual presentation by co-author Laxmi Murthy, who walked the audience through the book, which charts the history of the contemporary Indian women’s movement through posters created over the years by women’s groups across the country and a review of the various campaigns and issues addressed by feminists in the country since the 1970s. The book is the product of the Poster Women (www.posterwomen.org) project of Zubaan, an independent feminist publishing house based in Delhi. The audience then learnt about the concepts and decisions taken by the design team in the course of putting the book together with Murthy from the notes shared by the lead designer, Sarita Sundar of the Bangalore-based design-studio, Trapeze, who was unable to be present. In Sundar’s words, “[I was] amazed at the incredible passion, the sheer talent in the art that the women from all over India have produced. The strength of conviction of the artists and the activists shone through , the uninhibitedness with which they had visualized their work, created works that not only had a power to move people to action but were works that I could look at with a purely aesthetic eye ( if that is a possibility).”

A panel discussion followed. Maithreyi Krishnaraj, a veteran of the women’s movement as well as the women’s studies discipline, who retired as professor and director of women’s studies at SNDT Women’s University, Mumbai, spoke about the emergence, role and development of women’s studies in India. She went on to lament the decline of women’s studies, where, in fact at some places, these departments have allowed themselves to turn into training centres for stitching, tailoring and beautician’s work.

Padmalatha Ravi, co-founder and editor of Just Femme and associate editor of Citizen Matters, shared her thoughts on the relevance of feminism and the women’s movement today, and especially to the younger generation. Subramaniam Vincent, co-founder and editor of India Together and Citizen Matters, provided a male point of view, suggesting ways in which the movement could draw more men into the process of working towards dismantling unjust hierarchies, including the gender hierarchy. The session was compered by journalist Vasanthi Hariprakash and moderated by journalist and author Ammu Joseph.

An interesting discussion followed the introductory remarks of the panel. Laxmi Murthy herself asked, “Are feminists some kind of vanishing dinosaurs?” Not many women want to be labeled ‘feminist’ in the younger generation, a section felt. What’s the reason for this apprehension to feminism? Some said, “Young women feel feminists are too radical because they invoke the image of bra-burning women ranting some extremist slogans over trifles like dowry and eve-teasing.” But no one ever burnt bras in India or elsewhere. Privileged women from metros don’t wish to be a part of any struggle but want the fruits of all the movements, suggested someone from the floor, while a queer activist working with trade unions forcefully stated that feminism is extremely relevant to struggling women.

A major leitmotif that emerged from some of the presentations and was debated in the lively, participatory discussion that followed was the apparent need to ‘repackage’ feminism/the women’s movement so that its meaning and relevance in today’s world would be more evident to more people, especially young women and men of all ages.

Not everyone agreed with the term ‘repackaging’, some suggesting that in some ways the concept of women’s empowerment had been so distorted over the years, especially by commercial interests, that it was almost unrecognisable already. Others were of the opinion that only highly privileged sections of society, including young women who do not seem to realise that they have benefited from the hard-won gains of the women’s movement, questioned the relevance of feminism today. However, many participants agreed that it was important to find ways and means to convey the essence of feminism and communicate the aims and objectives of the movement more imaginatively to a wider public. It was agreed that Our Pictures, Our Words could help reach out to more people.

(Thanks to Dr Bhupendra Yadav, Azim Premji University for inputs.)