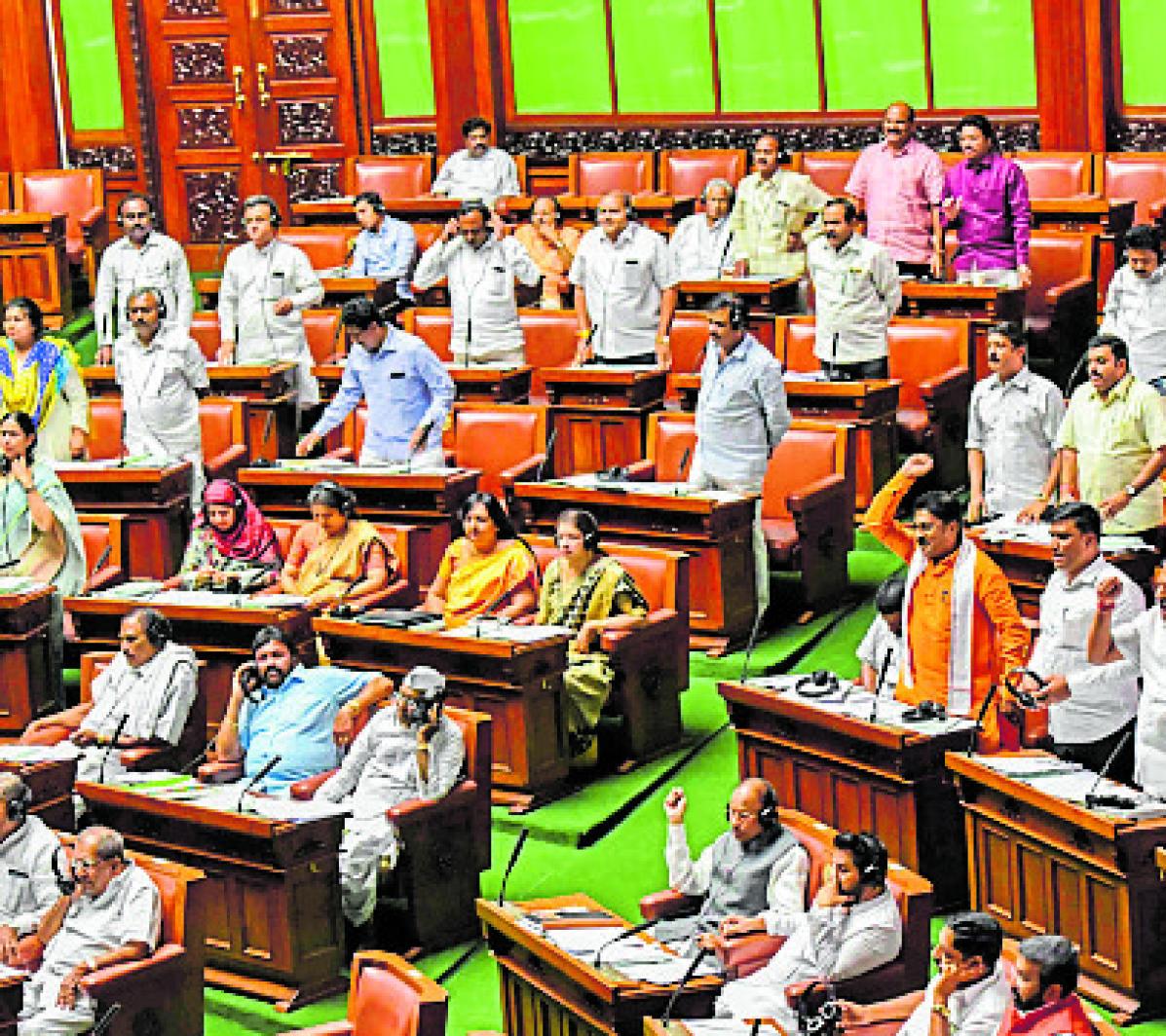 A deplorable scene unfolded in the Karnataka Legislative Assembly on February 12, with Speaker Ramesh Kumar’s odious comparison of his ordeal over allegations of corruption to that of a rape survivor being greeted with jokes and laughter by fellow (male) politicians across party lines. The disgraceful episode served to once again highlight a critical flaw in Indian legislatures at the state and national levels: they are essentially boys’ clubs.

The negligible minority of female citizens who gain entry into what are meant to be key institutions of democracy are invariably so outnumbered that most cannot summon up the confidence and courage to immediately object to such distasteful comments and conduct by male colleagues, even if they wish to. Media reports criticising the Speaker’s remarks evidently emboldened some of them to later meet and submit a letter to him, which eventually resulted in an apology of sorts.

Coincidentally, February 12 also witnessed the national launch in New Delhi of a new, growing, voluntary, non-partisan, Bengaluru-born collective called “Shakti — Political Power to Women,” aiming to work towards increasing women’s presence in legislatures. The top priority now is to persuade parties to give more tickets to women for the 2019 general elections and thereby improve women’s representation in the 17th Lok Sabha.

At present, there are only nine women among 225 legislators in the Karnataka Assembly, forming a negligible 4% of the elected representatives. There is currently only one woman in the state cabinet, with no woman among the eight inducted as ministers during the expansion in December 2018.

This is in a state that was a front-runner in enabling women’s participation in Panchayat Raj institutions a decade before the 73rd Amendment of the Constitution extended the three-tiered system of local self-government in rural areas and reservation for women in grassroots politics to the rest of the country. Karnataka increased the mandatory reservation of one-third of all seats in panchayat bodies for women to 50% nearly a decade ago. There is 50% reservation for women in Bengaluru’s municipal council as well. But the Assembly remains overwhelmingly male-dominated.

What else can be expected when major parties continue to resist fielding women for election to both Parliament and legislative assemblies? According to a recent analysis, only 5.8% of all candidates fielded by the Congress during the 11 general elections since 1977 (excluding by-polls) were women. The corresponding figures for the BJP and JD(S) were 3.8% and below 9% respectively.

Regional parties are not much better. In the last election in Tamil Nadu, the Dravida Munnetra Kazhagam gave a mere 5% of tickets to women. In the recent assembly elections in Telangana, the ruling Telangana Rashtra Samithi gave women less than 4% of tickets. The Trinamool Congress is a rare exception, giving 15% of its tickets to female candidates in 2016, up from 14% in 2011. The TMC has 11 women among its 34 MPs (32%) and 29 among the 40 female MLAs in the West Bengal Assembly.

The percentage of women elected to Parliament and legislative assemblies has stagnated at around 10% nearly 72 years after Independence. Women MPs constitute less than 12% of the outgoing Lok Sabha, half the worldwide average of 23.4%. Significantly, the figure has never gone beyond 12% at any point. There are disturbing indications of a possible downward trend, going by the recent assembly elections in five states, which brought the percentage of female MLAs down to 9% from the previous 11% (2013-14); Chhattisgarh was the only exception.

Several countries — including smaller, newer democracies — have better records. Tiny Guam’s recently assembled legislature boasts a female membership of 67%. Rwanda, which has been setting world records since 2003, still has a slight edge, with women now constituting 67.5% of its lower house of Parliament. Sudan (30.5%) and Pakistan (20.6%) are also well ahead of India. The November 2018 elections in the US brought a record number of women into the 116th Congress: nearly a quarter of its voting membership. Women also make up 25% of the US Senate.

India’s abysmal performance defies all logic — except that of unbridled patriarchy and male privilege. Women have always enjoyed voting rights in independent India. They comprise 49% of the nation’s voters. In most states, the female voter turnout now surpasses that of men. During the 2014 general elections, female turnout was 65.3%, up from 55.82% in 2009, and the gender gap stood at a mere 1.8 percentage points, the narrowest margin on record.

Women’s alleged disinterest in participating in electoral politics is evidently a red herring. Most major parties have millions of female members. An estimated one million women have been elected to panchayat bodies at the village, taluk and district levels. Women may make up just over one-twelfth of candidates during parliamentary elections and one-tenth of eventual winners, and political parties may continue to be miserly in giving them tickets for state and national elections, but it is important to note that many women still do run as independents or aligned to smaller parties, despite the slim chances of winning.

Winnability is also obviously not the impediment parties suggest it is. According to data compiled by the Election Commission, female candidates have proved more winnable than men in Lok Sabha elections from 1952 onwards.

The findings of an online survey conducted on January 15, made public during the recent Shakti event in Delhi, suggest that voters are far ahead of political parties in valuing women. Asked if they want more women MPs in the Lok Sabha in 2019, the response of 82.2% of the 10 lakh registered voters across 24 states who participated was an emphatic “Yes.”

That makes sense. Recent research examining election data for 4,265 assembly constituencies over two decades (1992-2012) suggests that constituencies that elect women are likely to witness more economic growth than those favouring male politicians. Perhaps it is time political parties listened to voters instead of the customary other way around.

The piece was first published in Deccan Herald on February 18, 2019